#Video: Pimp my iPhone: cool accessories for almost nothing

We all know that many nice things from the official store Russia are expensive, you can buy in China with free shipping and much cheaper. We picked up a few interesting goods, ordered them, have studied and will share them with you.

A long wait when Apple will equip the iPhone the possibility of wireless charging. We did not wait for this in 2016 with the release of the iPhone 7, but rumor has it that this will be done in 2017, when there will be iPhone 8. It is even possible, it won’t be the usual wireless charging, and a new word in this direction. If you believe the rumors, the phone will not charge at a distance of several millimeters from the charging station and at a distance of several meters. Rumors is a delicate matter, and you can say many things, and test them, we can not until the second half of 2017.

Nevertheless, we can already charge your iPhone without using Lightning cable. 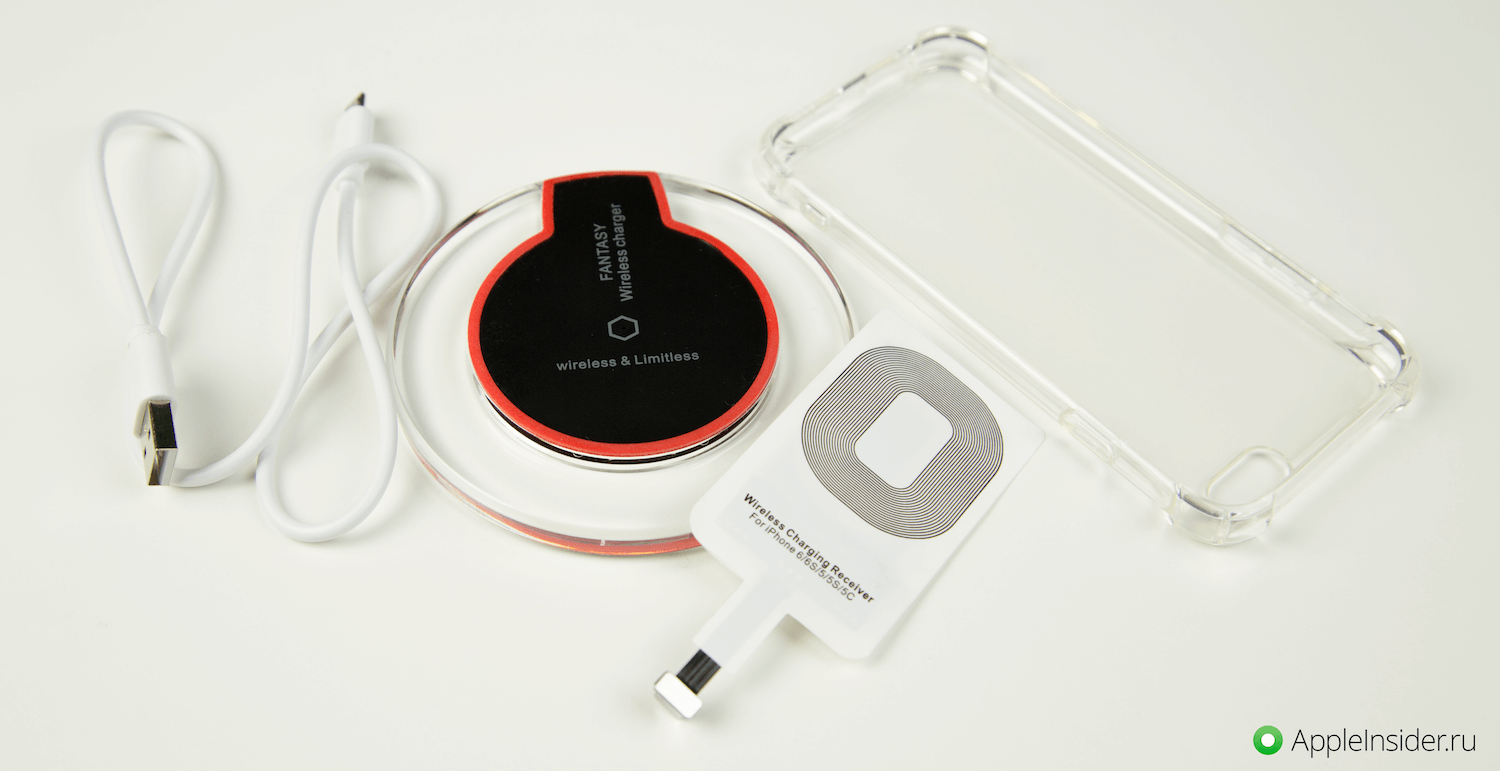 For this we need a wireless charging station, which can be bought for a dollar 6.52 with free shipping. Included is a spiral that connects to the standard slot charging iPhone, charging station, USB cable — microUSB and case on the phone, allowing you to press the spiral against the case, so she wouldn’t fall off. To use a complete case not necessarily, since the thickness of the helix is small and it can fit any case including original leather and silicone.

The point is that under the back of the device itself is placed a spiral, and from it into the charger socket is the power Flex cable. Then everything on those phones where this solution is implemented initially in the design. Here lies the first plus and minus at the same time. Plus the fact that Lightning will always be closed against dirt, and the downside is that you will have to remove the cover and remove the connector to charge the phone in the normal cable.

The device is working properly. Charging speed is quite high and very close to the speed of the charge through the wire. The manufacturer promises a charging efficiency of over 76% and output current up to 1A, in that readily believe, given the speed of charging. 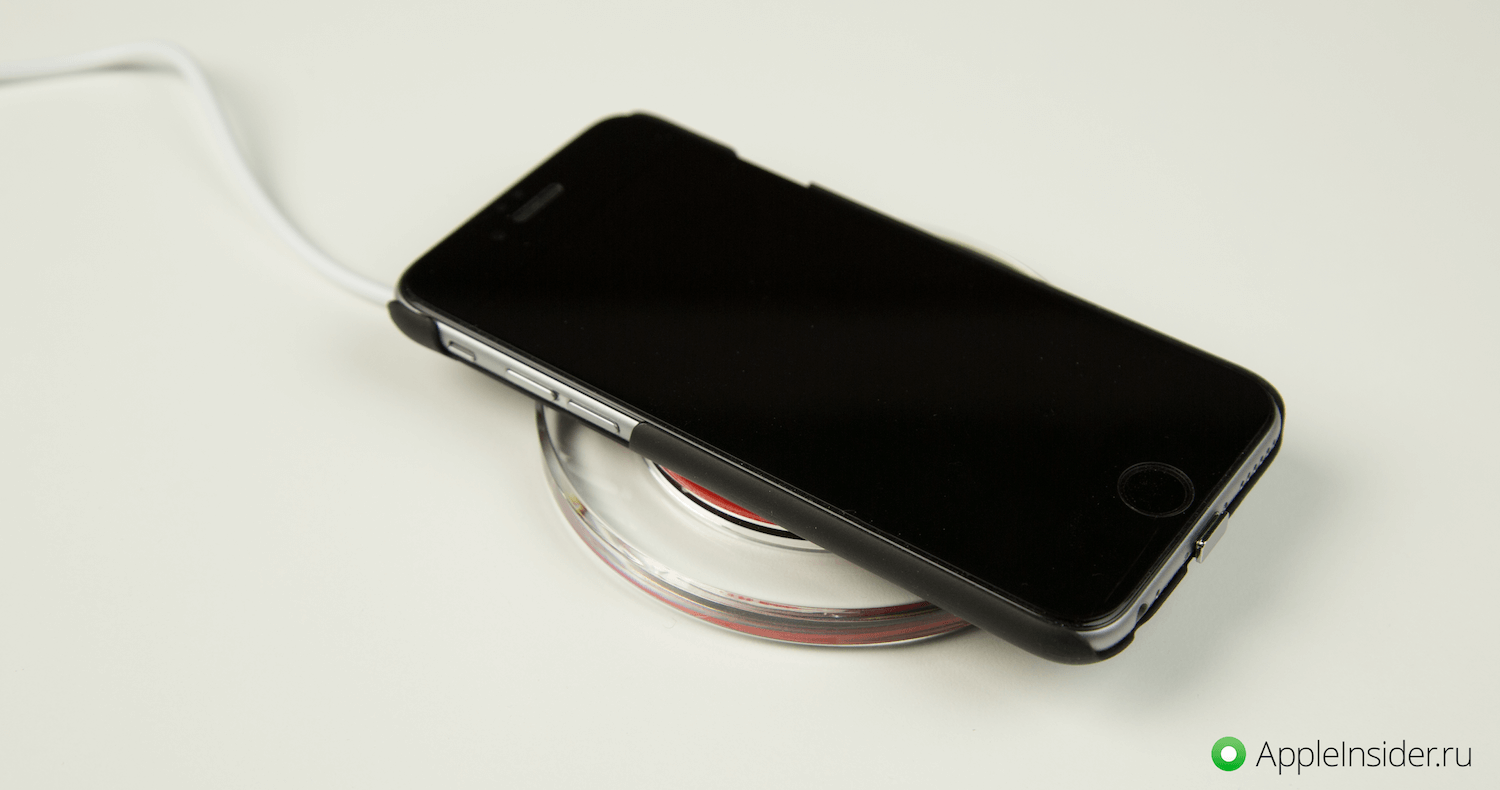 Playground plastic, it has a pretty good design, which is important, as it will always lie on the desktop or bedside table. Its diameter is 10 cm, and a thickness of only 9.5 mm.

An additional advantage of this charger is that it can charge some other models of phones without the extra bells and whistles. For example, the device supports Samsung Galaxy S6. Apple Watch, unfortunately, not charged, anyway.

As I said, buy the charging station is just over a dollar 6.52 with free shipping.

Phone covers with stand is highly demanded and Asia, he saw. Do they even what did not see on the phone. Sometimes the unthinkable design of the mesh that do not understand how it catches the network. But looking at them the idea of covers with possibility of installation in an inclined position, it is possible and even necessary. 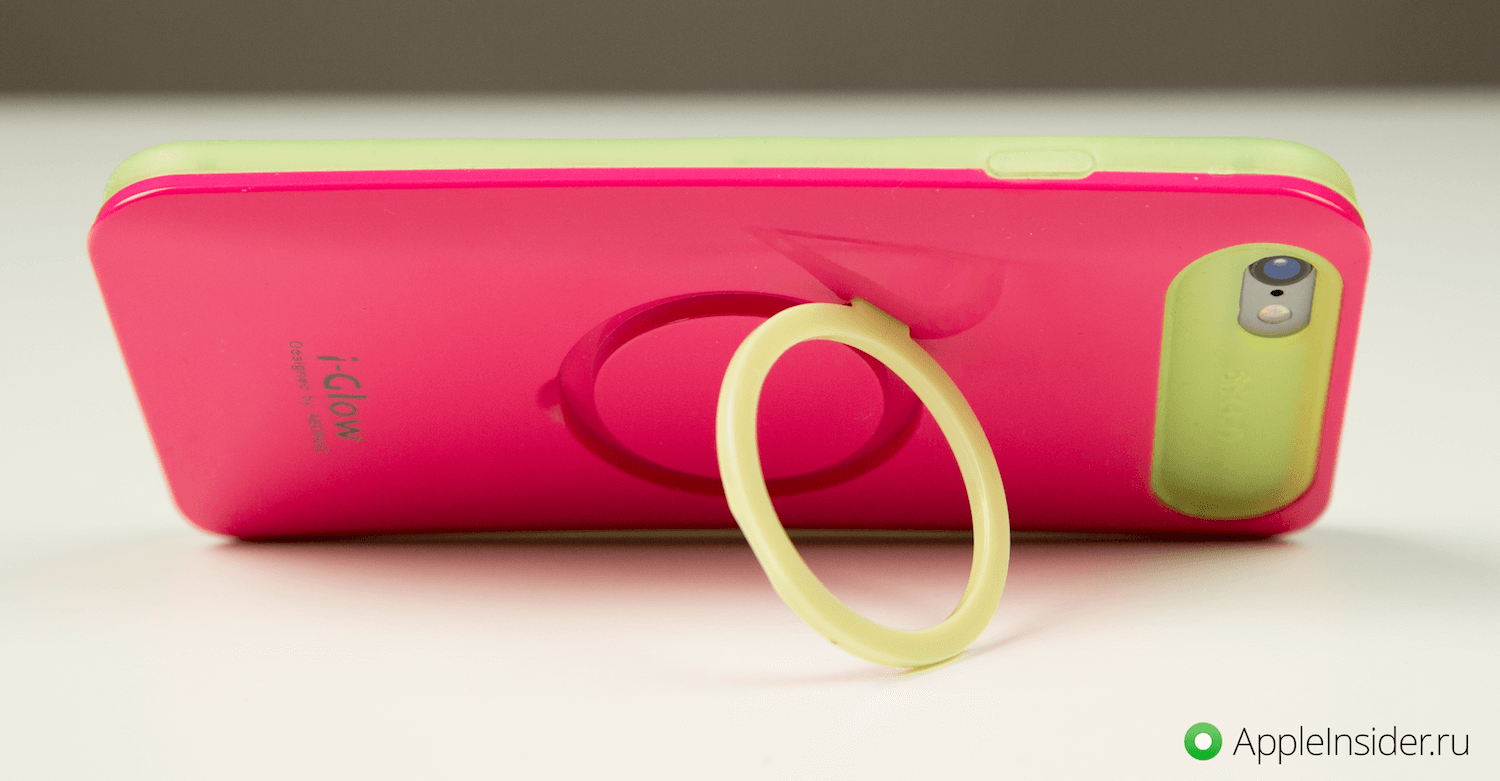 One of these covers with stand we ordered. The role of the stand in this case performs a ring on the back. It leans back and allows you to set your iPhone at a 45 degree angle for comfortable viewing video, reading, or just so you could put the phone next to the computer in the workplace, and not to put it. A ring you can wear on your finger for better grip of phone in hand, for example, in transport. 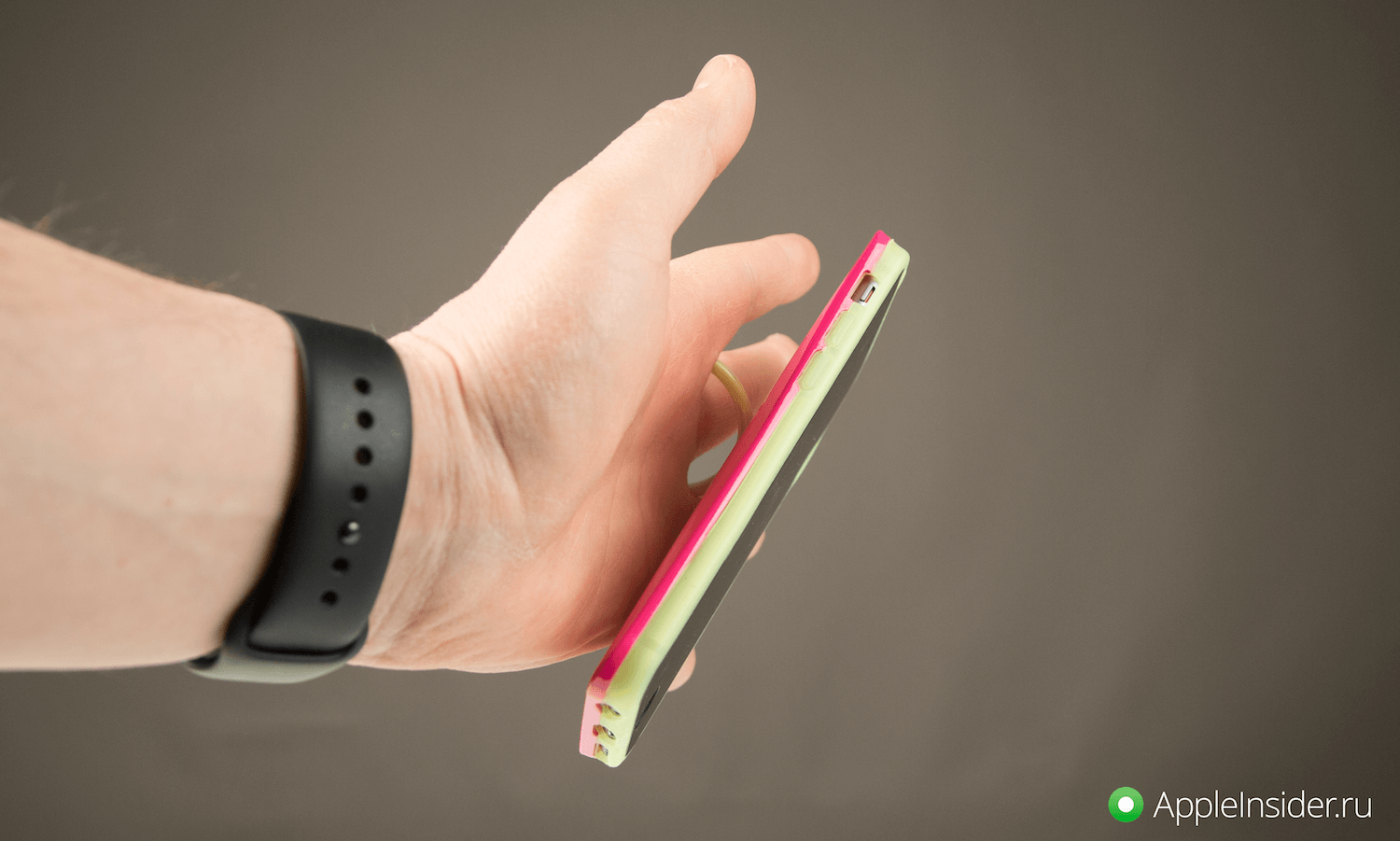 The case is a little thick, but the rear wall is smooth and rounded, making it more pleasant in the hand. The inner part is fully covered with a soft silicone that protects the phone from scratches, while the thick plastic from drops. The case may crack from a strong blow, but can protect the body from severe damage, and 4.89 dollar for it — a small price to pay.

One of the important features of the case is a soft glow in the dark silicone part, which will always make it easy to find the phone in the dark, say in the night.

Means for cleaning the keyboard

Everyone who works on the low floors of buildings or likes to “capture cookie” at the computer, you know how hard it is sometimes to get the dust and crumbs out of the keyboard. Especially if we are not talking about the Mac keyboard or the like, and the one in which the keys are located close to each other. From the keyboard constantly sticking dust, lint, etc. Attempts to clean up the mess cause she just falls deeper under the keys. To remove it we tried to order a special tool similar to jelly. The substance itself is slightly sticky and is easy to get out of the keyboard all the lint, dust and crumbs. 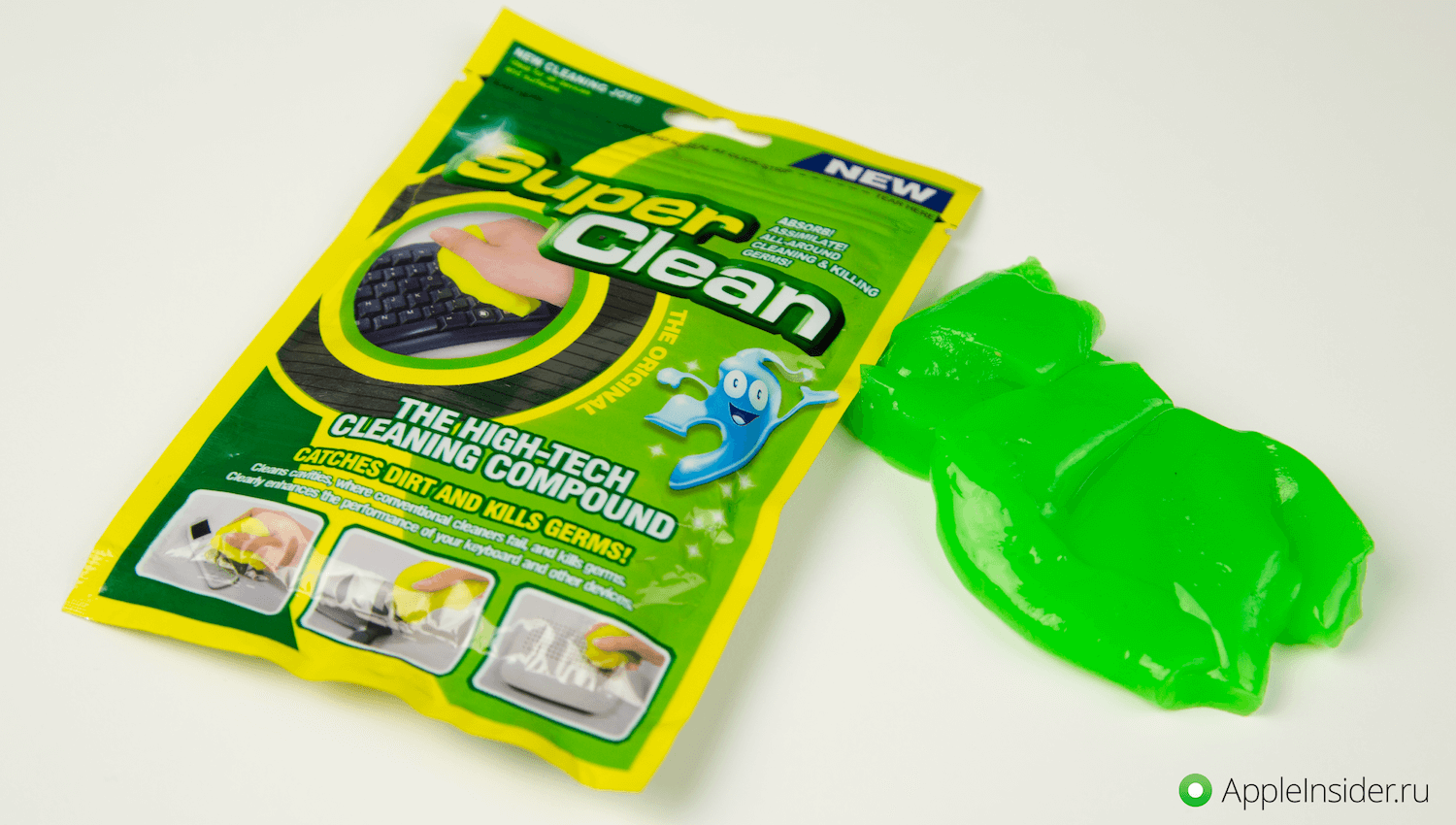 In addition to the keyboard, to clean any equipment with hard to access areas, for example, routers, vents of computers, landlines, grating musical equipment and so on.

To buy a tool to clean the keyboard for $ 2.34 with free shipping.