What a Notion — a program in which you can organize life

Tell, what can the app, in which you can do everything — write, create tables, plan and work together. 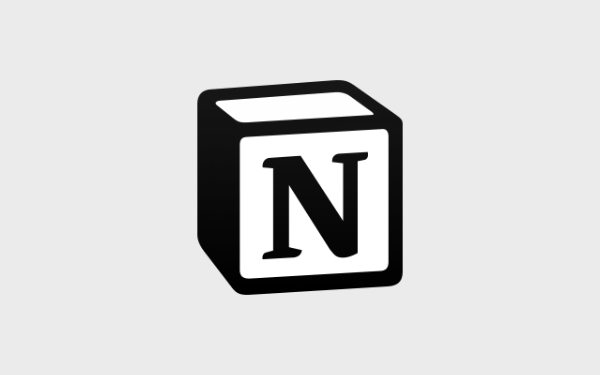 You can take notes, write tasks for the day or to engage in long-term planning. You can keep a private diary or writing a story for a few chapters. Can be used in the team’s Kanban system. The problem is that each of these “possible” (if you want to run them on iOS) is hidden separate application. And to perform all the tasks from the list — will have to score the whole start screen.

Fortunately, now there is one solution which is able to kill a dozen alternatives. This is a program Notion (download in App Store) and it is possible to organize your entire life.

The free environment instead of a set of rules

Most popular semitechnical will always be the one that is preinstalled in the system. Over it no need to think: it gives a set of attitudes, within which the user is. Third-party developers to attract people not its platform (and even more — to pay) you need to invent additional functions. The developers Notion in this respect went further than others — they have given users complete freedom.

With the freedom to control difficult — it confuses an abundance of opportunities. And Notion. It is somatocyst in which you can create a separate page with a support tree structure — and within them to work with convenient formats. 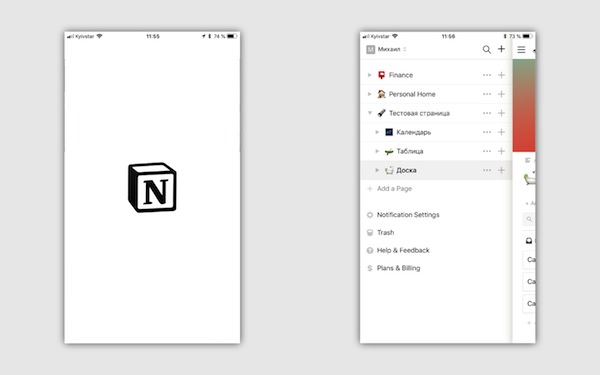 Pages can be issued as a plain text document, turn it into a Kanban Board, like or make a big to-do list. Also available ready-made templates. For example: the financial plan in table format or pre created draft management goals for the year.

Each row in the Notion is a construction block that can take a variety of forms. And the “block” — the official terminology of the program. They can be turned into subheadings, lists, nested pages.

Around these particles is built and monetization programs. The free plan offers 1,000 units for use. That’s a lot — but if you ask to translate your entire life in Notion, of a thousand is not enough. Team plans offer to pay 8 dollars per person per month. Individual tariff is twice cheaper and costs $ 4 per month.

Price puts between simple Notion, but nowhere near as functional semitechnical like a Bear (worth 1.5 USD/month) and expensive monsters like Evernote (cost $ 8/month). Premium package Notion removes restrictions on the number of blocks.

How to organize life

Assume that you have no limits on blocks. For starters, you need to create areas of responsibility — it’s your life roles. The most obvious examples are: work, home, gym.

Each should create its own wiki help with a tree structure. That is, to combine all available information.

For example, if long deferred household tasks — to split the task space. You buy the kitchen, in the hall to fix this, update the bedroom for something else. Organizational flexibility Notion allows not to bother with the tags, and to create each task you want to edit. 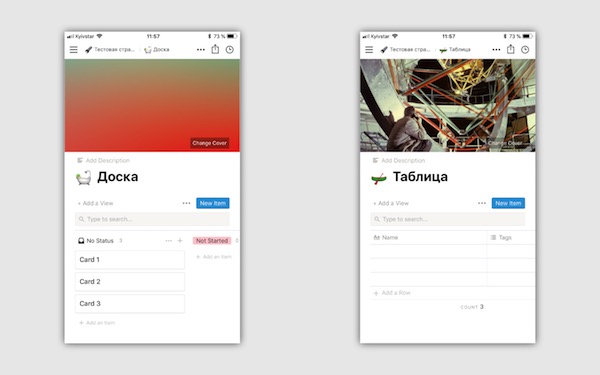 Wiki material can perform more than the usual role of the knowledge base. For example, if you are learning a new software tool for the job — enough to create under it the page and write the attachment with the description of the desired functions or lists of keyboard shortcuts. If collecting new recipes for cooking, Notion pull this task. For pupils or students, it’s also the perfect way to gather in one place all the materials.

Another example will help writers. Notion, the editor who maintains the formatting, maintain several blogs: just need to create them on the page. 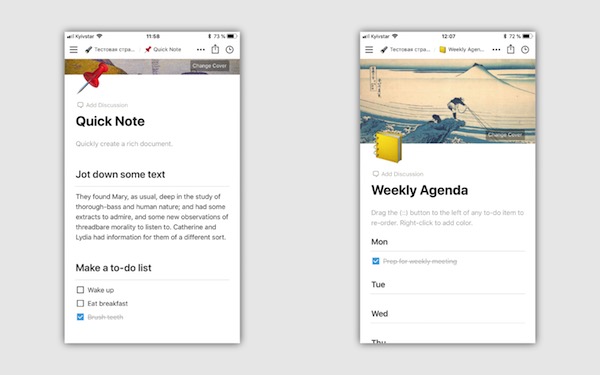 Special attention is given to the integration of the Kanban boards. They popularized the Trello service. The point is that things are written on cards, and cards can be moved between multiple speakers. This is a very popular team tool, but also in his personal life he can be useful. A trivial partitioning purposes, “Planned”, “Started” and “Done” is much easier life.

With so many possibilities Notion narrowly escaped the monster.

On the contrary, the program looks minimalist and attractivewithout cluttering up the screen with unnecessary features. All operations with blocks are performed via the context menu. 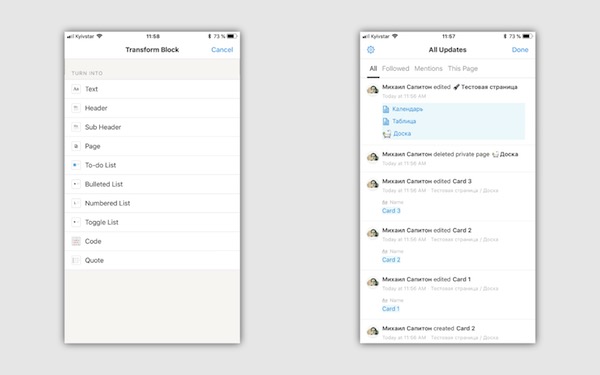 Positive and adds that the Notion allows to set for each page individually cover and relies on Emoji symbols. They are easily put down in the names of pages and headings, greatly simplifying the navigation side bar, which is right next to the table of content.

Furthermore, even the most complex tables with functions or huge documents in Notion retain a decent look. Black-and-white aesthetics of the program and the clever use of space help to avoid visual claustrophobia.

As with any program, Notion is not without drawbacks. The first was especially painful to admit — it is the depth and variety of opportunities.

Described by me scenario, for example, do not reveal a tenth of the building program. But can some of the users due to the potential complexity. An even greater shock comes when you open the app for the first time and without preparation — the brain literally boils to how many things you can do. Notion, of course, deserves the right to be called a creative environment, but this title is accompanied by difficulty to learn. 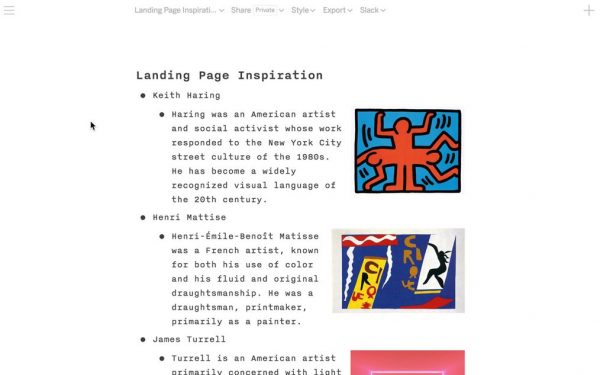 The second negative Notion — speed. The program is available on iOS, Android, Mac and Windows, but suffers from slow scrolling and micro-podlahoviny. The source of the problem is obvious: customers represent optimized web interfaces. From the smoothness of native programs Notion so far away. However, critical slow, you will not notice.

Do I need to take?

The question is, first of all, to you. If it’s time to bring all the records and in order — a better alternative to think hard.

If you need a convenient team project with many possibilities, the Notion also looks competitive. Finally, you can try the service simply from a desire to bother — there are people who like to sort out and restore order in all records.

Such variability, in my opinion, is apparent. To the Notion is worth a look and, unlike many software startups, it really solves the problem.

This is a kind of panacea for many problems: fragmentation functions, organizational limits, and creative barriers. The cure for the productivity — almost no side effects.