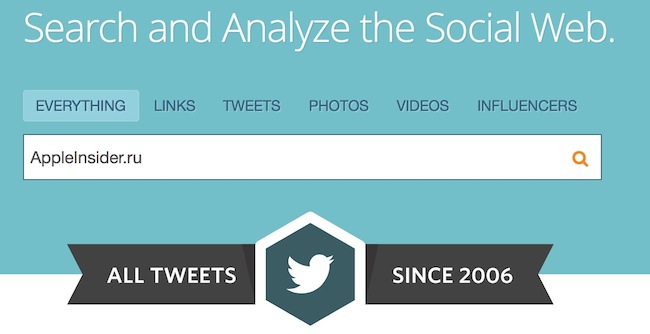 Marathon large purchases of start-UPS from Apple continues. According to The Wall Street Journal, the Corporation has acquired Analytics company Topsy, which analyses social networks such as Twitter and Google+. According to the edition, the transaction amounted to more than $ 225 million.

In Apple confirmed purchase of Topsy, but decided to do it in the style of Tim cook.

Apple periodically acquires small technology companies, and we generally do not discuss our purpose or plans, — said one of the representatives of the Corporation.

It is unclear why Apple took Topsy, as its music social network Ping the tech giant closed in September last year. It is possible that the company is going to integrate analysis algorithms Topsy in their other services like iTunes Radio. For example, to inform his listeners about the songs and the performers, which is most actively discussed in Twitter.

On the main page posted the Topsy social search tool, which indexes the tweets from 2006 to the present day. In addition, a special section of the site allows you to track the most popular social topics, mainly in the microblogging service.

The competition from JBL, question No. 9: What is the wattage of the loudest docking station JBL Rumble (W)?

As suggested by TechCrunch, Apple may also use Topsy to improve the effectiveness of its advertising platform iAd by identifying user preferences based on their social activity. In addition, the service could have an impact on improving the search algorithm of the App store, which Apple has lately been paying close attention.

This year, Apple got quite a lot of young technology companies. According to Tim cook at the conference devoted to results of the Corporation for the fourth fiscal quarter, Apple bought a number of startups for 2013 reached 15. That is, the company that trades every 3-4 weeks.

There are suggestions that on the basis of Topsy, Apple can begin construction of its own search tool, but it is unlikely such a product will be demanded on the market in the era of developed Google, Yahoo and Bing. Moreover, the company now has a priority other goals.