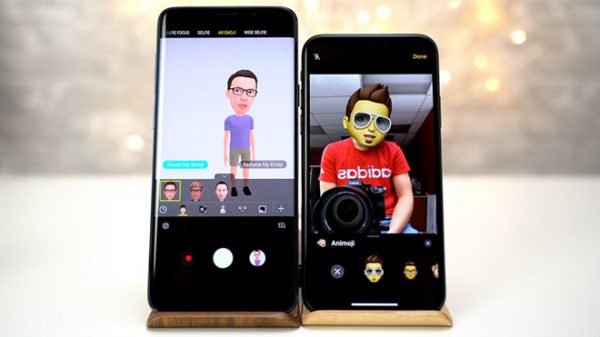 Samsung users could create similar character immediately, as there AR Emoji. In order to use this feature on the flagship Galaxy smartphones, you need to go to the camera app.

Memoji can be found in iMessage. So far they are only available to owners of iPhone X. Maybe in the fall of 2018 to join them and users of the new Apple smartphones are equipped with FaceID. The location in the messenger, not coincidentally, Apple stresses that the animated emoticons were created specifically in order to diversify communication with your friends.

To get a personal smiley on Samsung, you need to go to a special section of the camera and take a selfie. The application processes the received image and adds to the standard billet distinctive features of the user.

In iOS 12, you can skip to configuring the appearance of the character. Memoji does not have to be an exact copy of the iPhone X. the User can convert his alter ego or create a smiley face, not like anyone.

To see all the details in the process of creation, the iPhone owner is enough to change the position of the head and the smiley face will turn after him. On the Samsung to turn the image have with your finger.

Memoji offers a wider range of head sizes, hairstyles and options for facial hair, including not only the shape of the beard, and eyebrows. Hair character move together with all the smiley face, while in AR the Emoji they often remain stationary.

Apple also did a better job with accessories. The user can dress the character, almost anything. All things look realistic as possible, and cast shadows.

Thanks TrueDepth camera Memoji facial expressions more expressive. But in AR Emoji the character has a body, and Apple decided to focus solely on the head.