IOS features that Apple “borrowed” from the JailBreak community: Part 2

The first version of iOS was far from perfect. In every major iOS update, Apple “borrowed” the most interesting solutions of the developers apps and tweaks for jailbroken devices. In a previous article we decided ponostalgirovat and remember the tweaks functionality which Apple has implemented in its mobile operating system.

Apple devices have a decent level of protection against theft and loss with the release of iOS 4.2 which began its work on the service “Find my iPhone”. Have the opportunity to track your lost device. Before the advent of service from Apple for the protection of jailbroken devices-posted iGotYa tweak. The service. was an interesting feature, he took the picture on the front camera whenever someone has entered the incorrect unlock code was sent to the owner via e-mail.

The jailbreak community before Apple realized the importance of instant access to camera from lock screen. Before the release of iOS 5 camera button on lock screen added tweak Snappy.

With the release of the iPhone 6S, and with it iOS 9 fans to do a selfie and part-time owners of smartphones from Apple have the opportunity to raise the level of the selfie to a new level. Before shutter release, the screen illuminated with white light. For the jailbreak community this novelty wasn’t a revelation, since they are already used to this FrontFlash.

Unlike Android smartphones, the iPhone lacked native support for scanning of QR codes before the release of iOS 11. As you could guess, this was not an inconvenience for the owners of devices with jailbreak, because they had NativeQR. 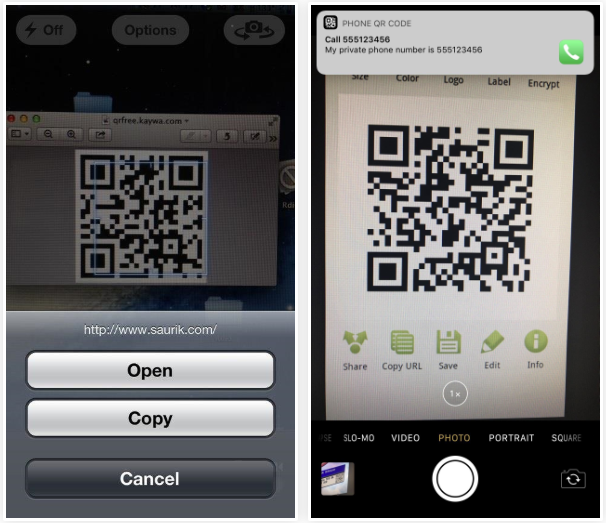 Modern iPhone users are unlikely to believe that before the release of iOS 5 Apple smartphone was not possible to create custom photo albums. All except the owners of gadgets with jailbreak, they for this purpose used the tweak PhotoAlbums+.

Your GIF in the gallery Photos (iOS 11)

Support GIF came from iPhone users with iOS 10. Up to this point, “gifs” gallery “Photos” were displayed as static images. By the time tenth from the iOS jailbreak community was the tweak GIFViewer, who coped superbly with the function of displaying highly customization with color.

Before the release of iOS 9 Apple is not too worried about the eyes of the user in the dark, luckily those who have done jailbreak your device had access to twice f.lux Сydia. Tweak analyze the surrounding environment with light sensors and to adjust to a comfortable temperature in the light of the screen.

Hard to imagine, but there was a time when the clock icon was useless. To correct this defect known jailbreak-developer Ryan Petrich has released tweak Live Clock that displays the current time on the icon. Thus, the live clock icon has been available since iPhone OS 2 at the time of the name “iOS” did not exist.

Before the release of iOS 7 in order to update the installed apps have to open the App Store and go to the tab “Updates”. The jailbreak community has designated this routine twice Auto App Updater has learned how to update apps in the background long before the release of the seventh iOS.

Card apps in the multitasking switcher (iOS 7 only)

The function to display the open apps as cards appeared first on iOS 7 up to this point by double-clicking on the Home button opened a small panel with labels. There is a possibility that Apple “borrowed” the display mode of the cards have a tweak Dash, which had a similar implementation to the release of the seventh version of the mobile OS.

The search for the necessary settings before the release of iOS 9 was like a game of maze, but with the release of ninth update, Apple added settings search. Developer Ryan Petrich has taken care of the users with jailbreak, which, since iOS 7 was available but this function with SearchSettings tweak.

For a long time Apple banned its users to remove stock applications. It often happens that unnecessary applications were stored in the folders “Apple”, “Standard” or “Trash.” To the anniversary of the iOS, Apple has made concessions to users and allowed to hide unused stock apps. This feature is not surprised by the jailbreak community because they already had a lot of tools to remove unwanted software, among them Springtomize, HideMex, AppHide and Poof.

Record what is happening on the screen (on iOS 11)

One of the most anticipated features in iOS 11 — the ability to record what is happening on the screen using buttons from the Control Center. Jailbreakers have used this feature starting from iOS 5, with the help of the tweak Display Recorder by Ryan Petrich.

Moving multiple labels on the screen (on iOS 11)

In iOS 11 Apple has finally added the ability to simultaneously move multiple labels on the screen. As with the above cases Apple company “slightly” late, smartphone users with a new vengeance used this opportunity by using MultiIconMover tweak from lance Fetters, which has been available since iPhone OS 3.