7 September 2016 for the iPhone 7, the company’s representatives said that the wireless future is coming and showed a new AirPods headphones. Since everyone was waiting for them, at least just out of interest. Wait. We have tested them for several days and are ready to tell them the whole truth.

Packaging headphones, as always, cupertinos concise. When you open the box the first thing that greets a buyer, classic inscription “Designed by apple in california”. Under the envelope with this inscription sheltered box, similar to packaging for dental floss. This is the most sensational Boxing for AirPods, which is the case, the charging station and the synchronization tool of the headphones with the phone. Moreover, not only Apple. 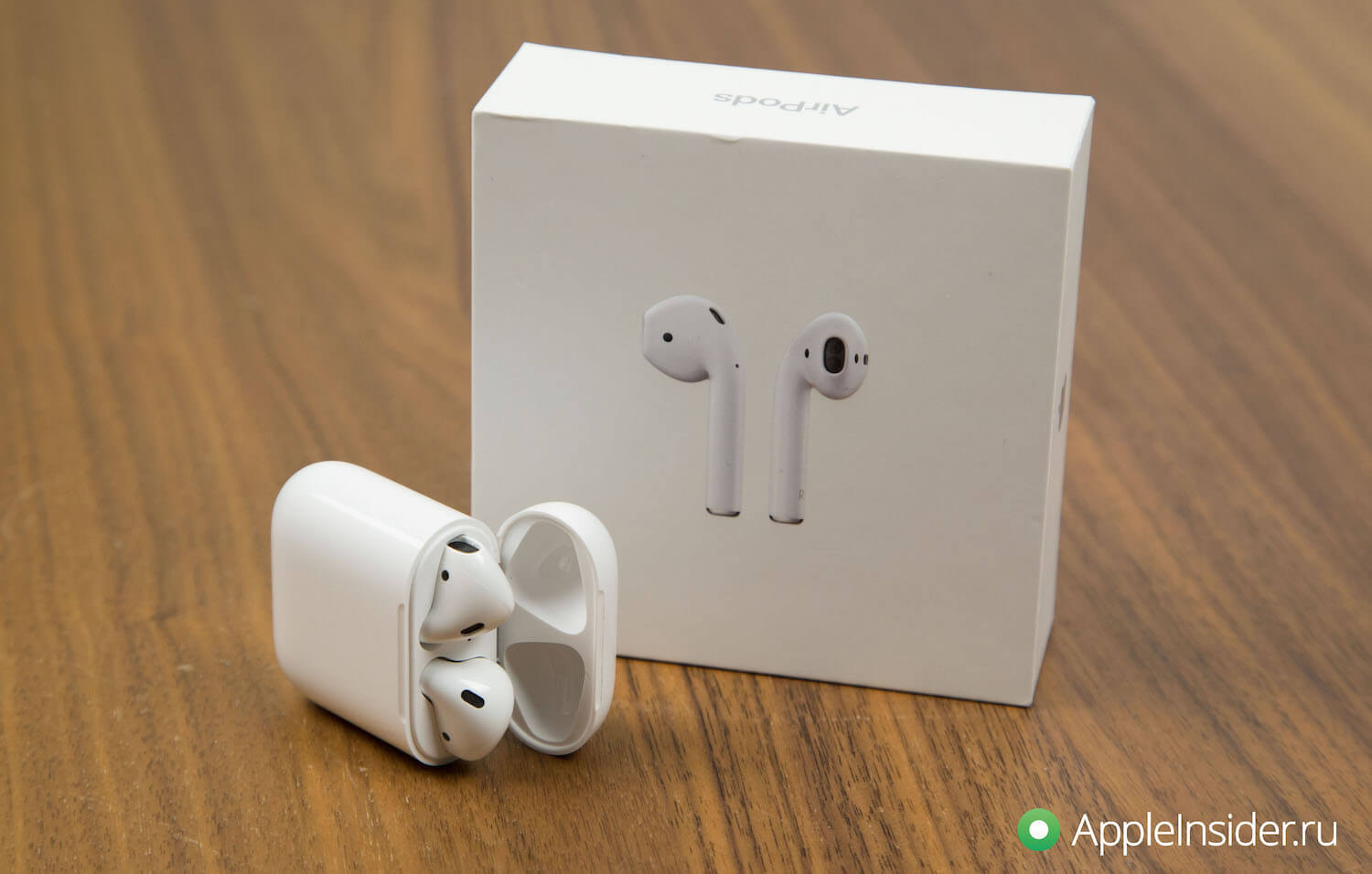 The earphones themselves look very similar to the familiar EarPods, the only difference is that sometimes they are a little thicker. But this is explained by the presence of the battery, microphone and electronic components, including the new chip is W1, which is responsible for the headphones. Also headphones built-in proximity sensors that determine whether the earphone inserted in the ear.

Charging is done via a regular Lightning cable, which lies on the bottom of the box. And the charging happens through the box, which accumulates energy and subsequently is able several times to charge the headphones. 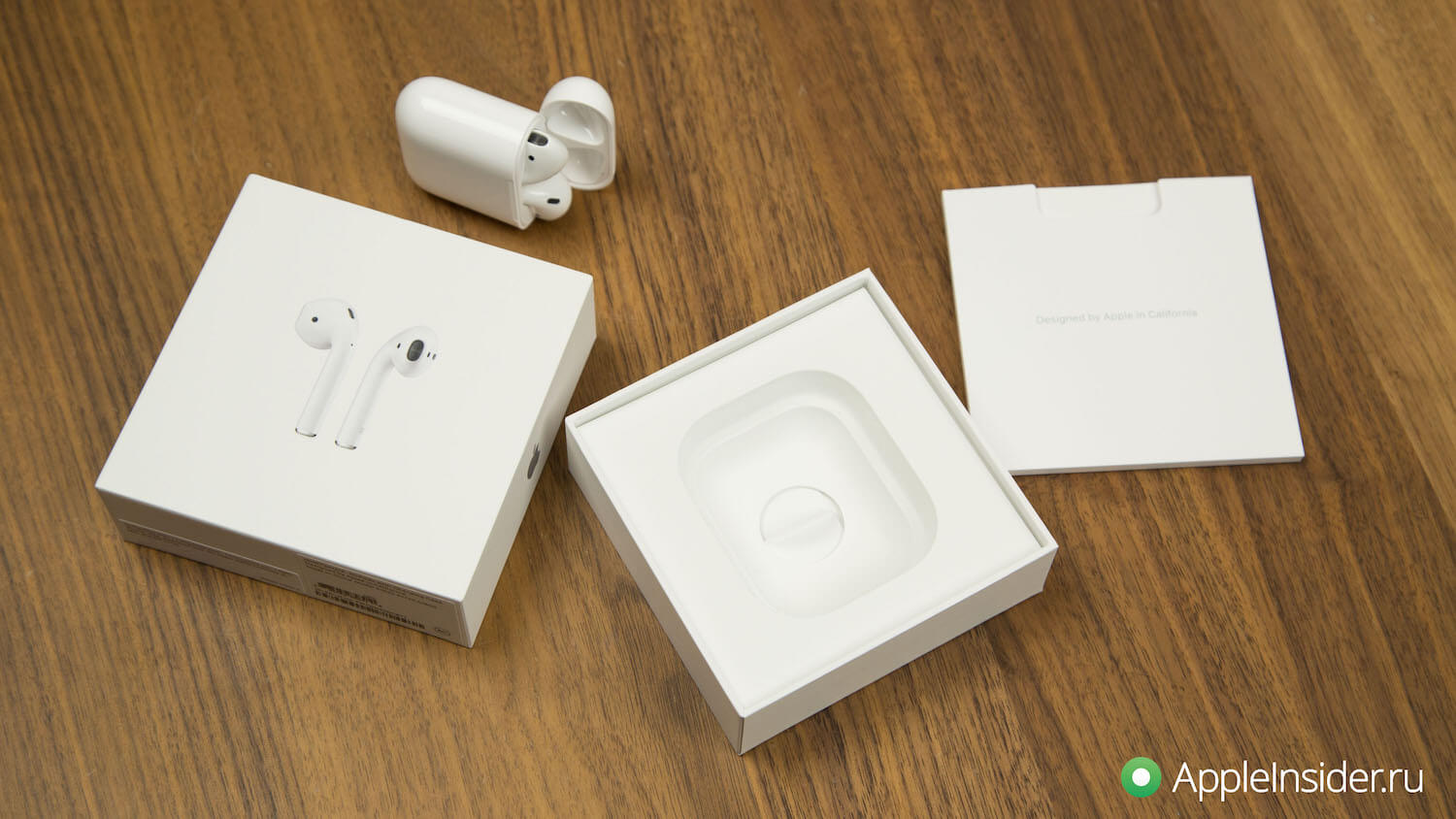 Headphones work via Bluetooth and not connected by wires, that is found in our time, but not very often. About compatibility on the Apple website stated that the headphones can work with the following devices:

Thus the device must be installed 10 iOS for iPhone, iPod and iPad or watch OS for the watch.

In addition, the connection with several other devices, but functionality will be greatly curtailed. The headphone will connect through the menu like a normal headset, and the function pause playback when removing the earphone is not available.

When you first connect start to feel the magic of Apple. That’s really impressive! All who have us in the editorial office tried to connect the headphones to his iPhone, said “Vauuu!”. Apple knows how to do so that was nice. Bring the box with the headphones to the phone, open it and a second later the inscription on the screen prompting you to connect. Click “connect” and you’re done. “It just work” as they say. While headphones are connected not only to phone but also to all supported devices connected to the same iCloud account. So, for example, by connecting the headphones to the phone, I found that on the iPad they also appeared in the memory, among Bluetooth devices. 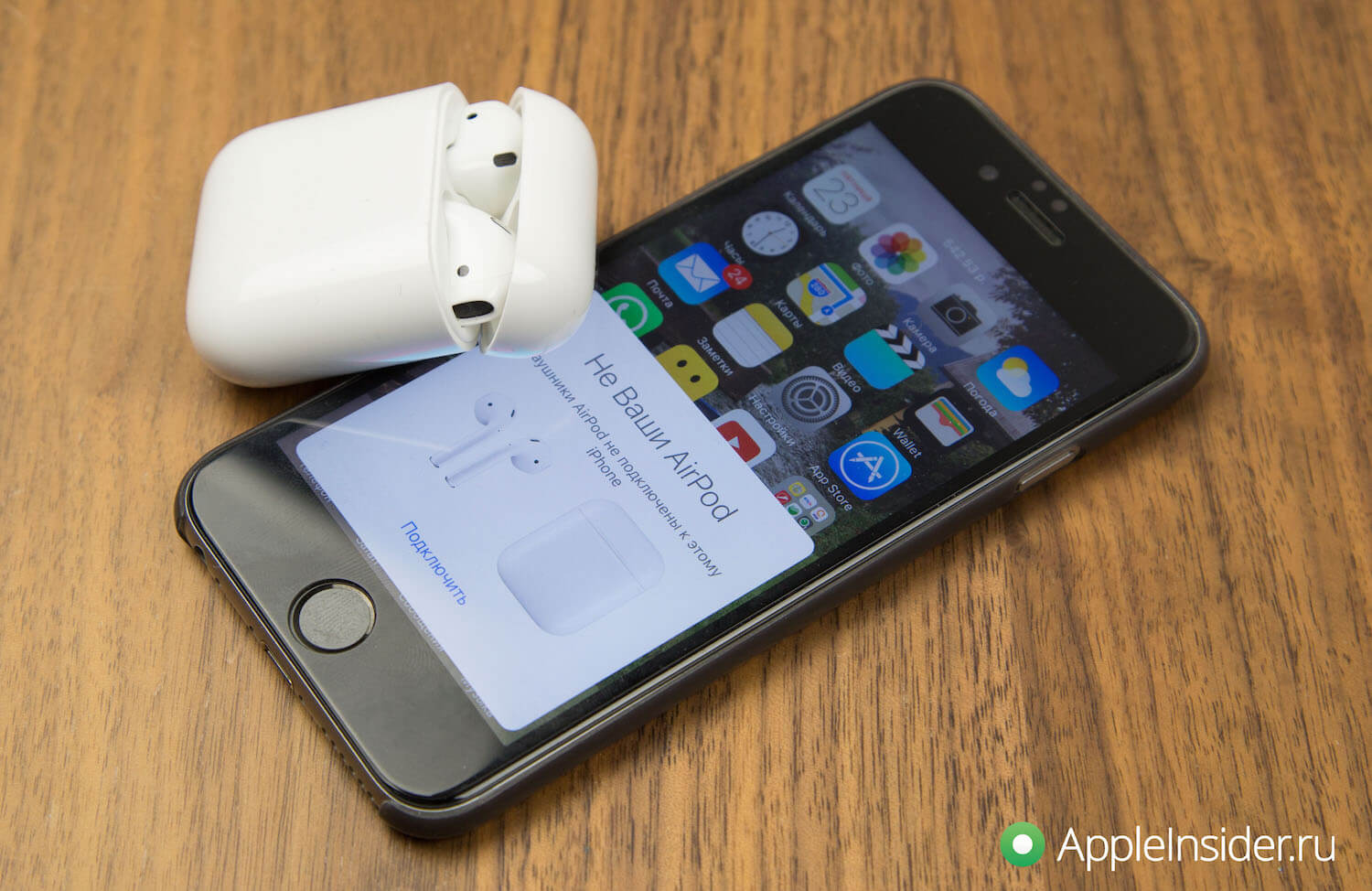 The sound quality and how you sit in the ears

The quality of the headphones is certainly different from the EarPods the best. The frequency range is wider, and the instruments and voices is more bright and distinct. In many respects it is a merit of the chip is W1, and, of course, most of those several years of development that have passed since the release of the EarPods. The sound became a little louder, which also pleases. All anything, if not for one thing. This all sounds to silence, well, or with small level of noise. If we talk about public transport or noisy street, a difference between EarPods and AirPods completely disappears. The reason for that never appeared soundproofing. All the noises still penetrated into the ears, bypassing the headphones. And if the road is safe, the subway is a real problem and lost all desire to use them.

Fit in the ear as a whole is the same as the EarPods, but the feeling is a little strange. In a good way. The wires in the EarPods is not greatly disturbed, but touch the skin and we did not notice, as I used to, but still felt. Now this is not, and you know, that’s kind of sitting like before, but something was missing. And the biggest advantage is manifested in the cold, when the wires a little freeze and then become not so flexible that there is even the ear, as the headset is pushed a little during movement. 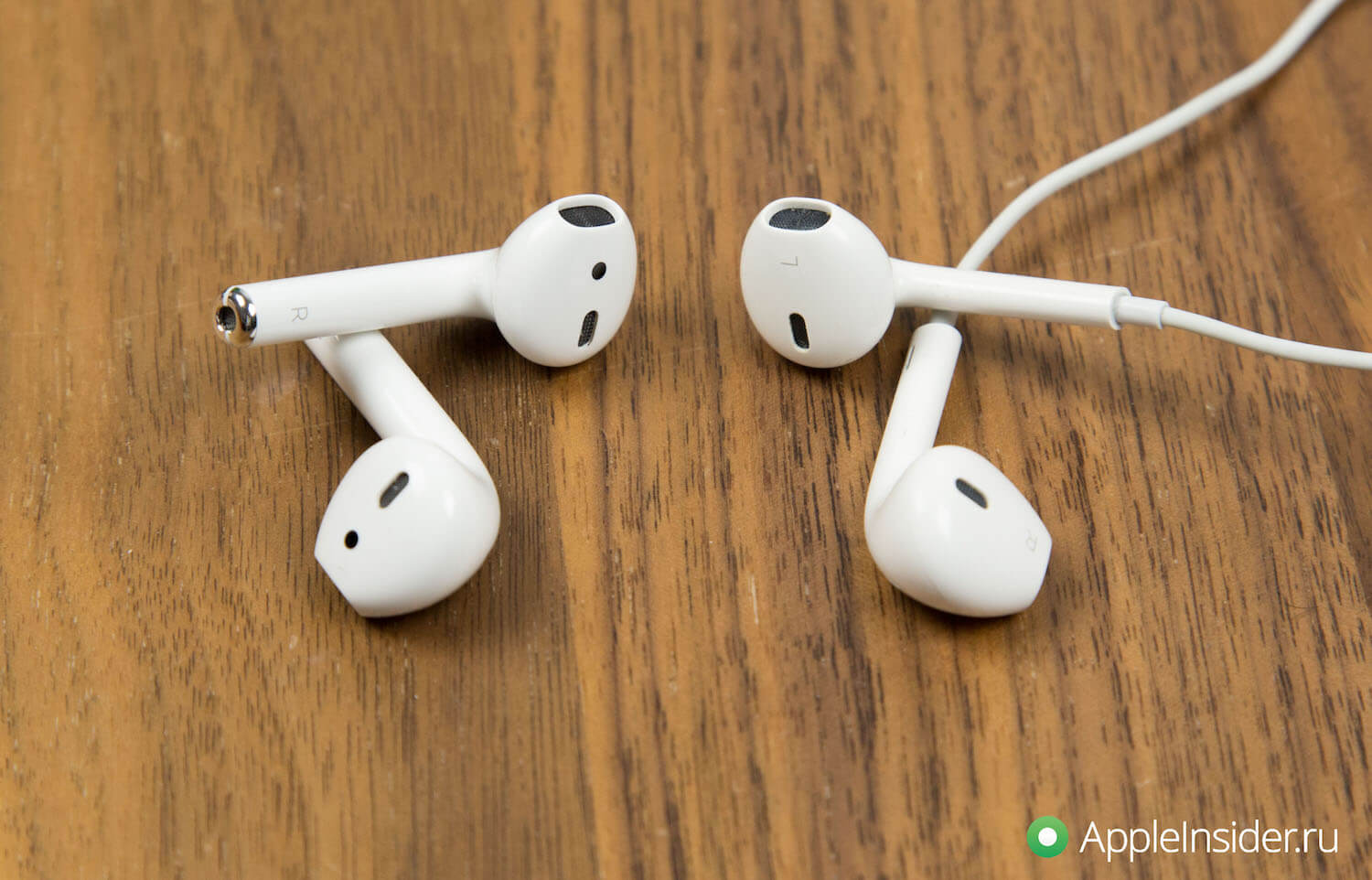 Apple promises 24 hours of music listening from a single charge. That is 5 hours of headphones and a few charge cycles from the box, which allow you to listen to music in total during this time. Real tests showed that the claimed figures are close to the truth. I listened to them for about four hours on the road, and some charge still left. In this part of my journey passed through the street, and there is now cool enough that makes adjustments to the autonomy of the electronics, and not for the better. 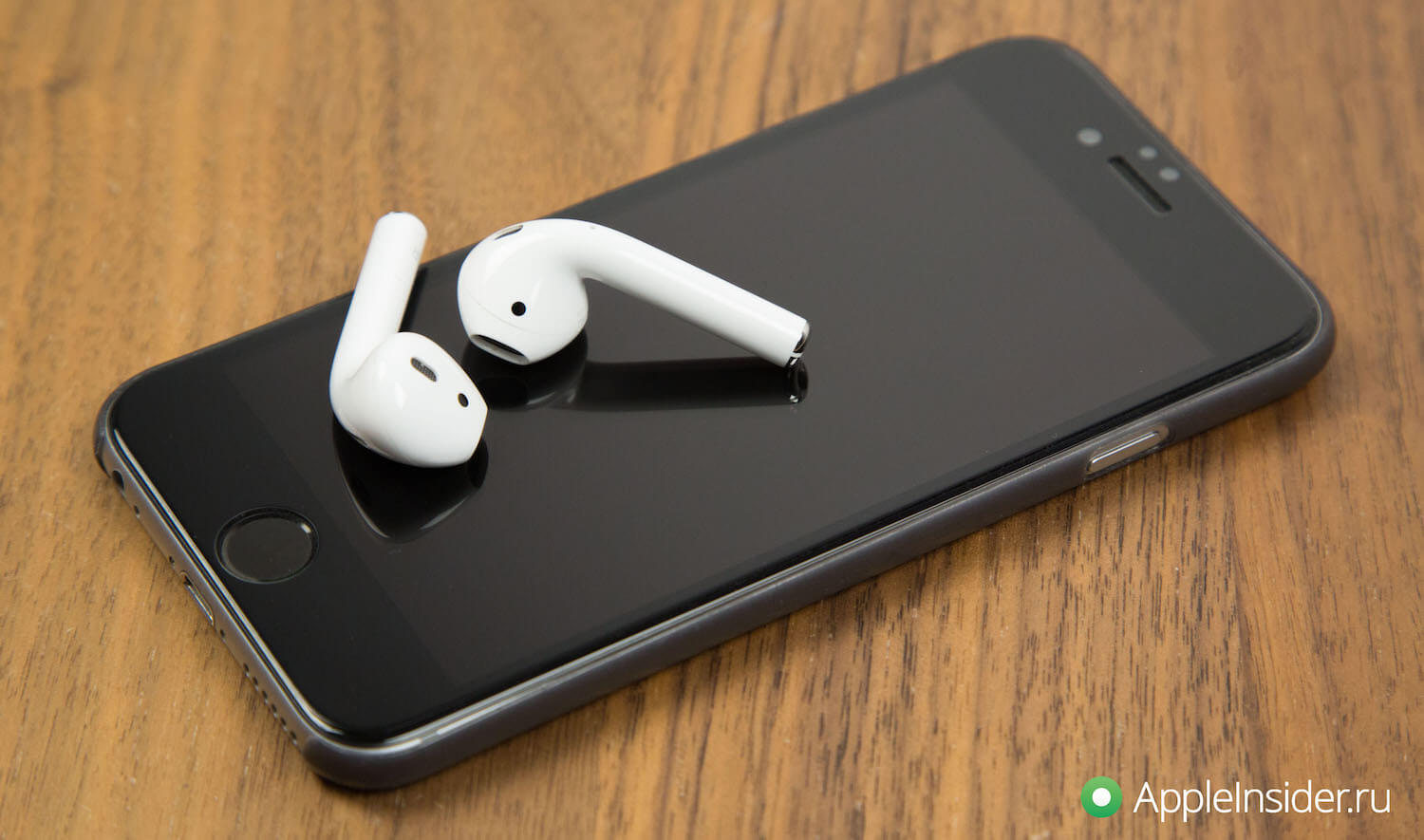 The headphones also have a quick charge function, when in 15 minutes they can be charged for listening to music for three hours. In fact, it is wrong to say that they work five hours. Words Apple about 24 hours of autonomy is more logical. The logic is that it’s rare for someone listening to music through headphones for five hours straight. And yet not listening, most likely, put them in a box so nothing gets lost. Well, there they are promptly charged, and again you can listen to. Maybe on a plane or train get to listen to more than five hours, but still be interrupted for 15 minutes is not such a big problem. So that normal life can safely assume that autonomy is 24 hours.

Is it easy to lose and what to do?

Until I used these headphones I never dropped it, but was constantly caught myself thinking that trying to do everything not to hurt and not to knock the AirPods from the ears. In reality, because of the long legs headphones are really easy to knock high collar jacket or coat and a scarf and a hood. Well, if not to see and yet to drop the headphones or, worse still, lose it, then you will have to pay 69 dollars for a new one. It is for this amount Apple sells the headphones separately. 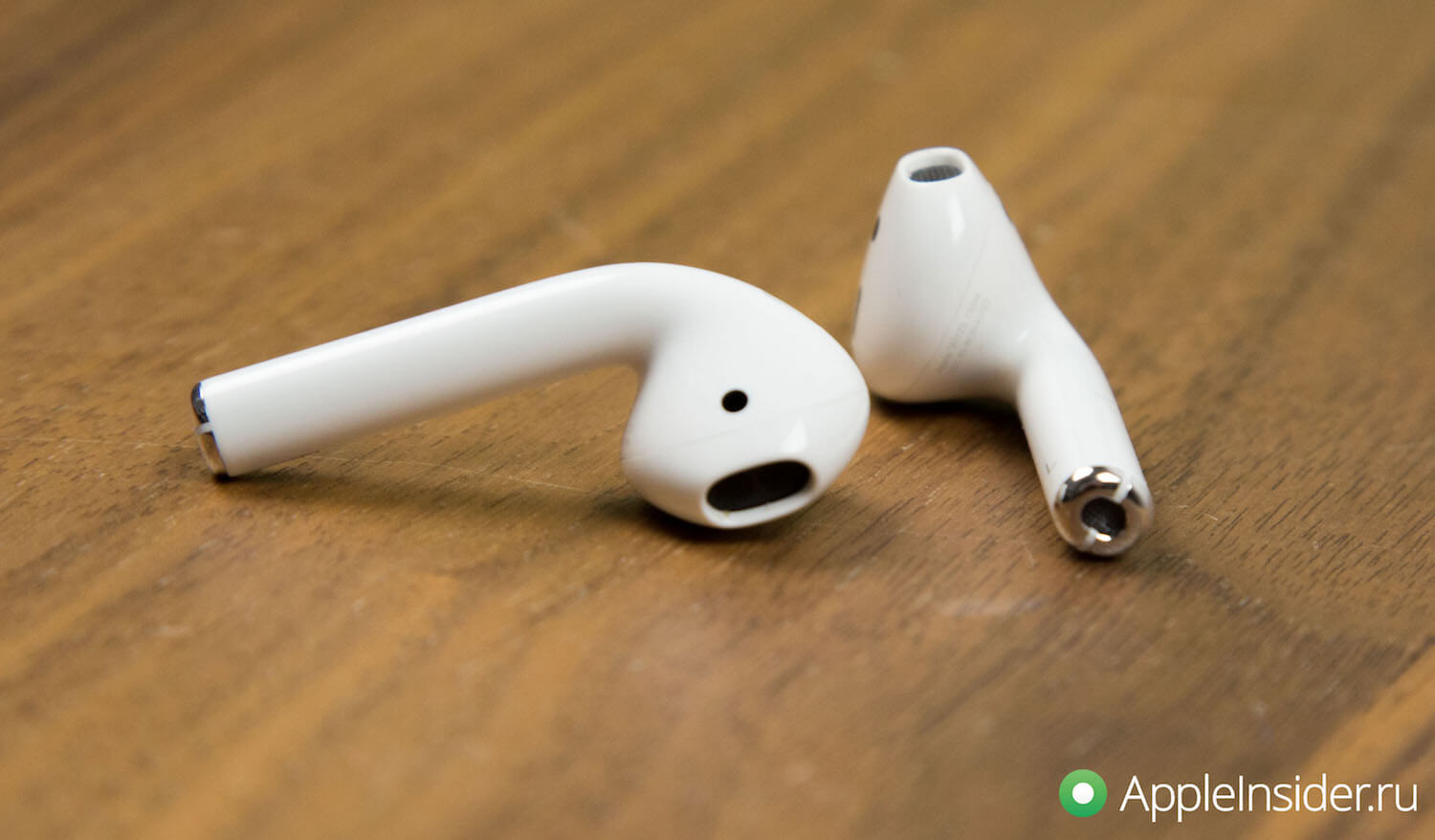 Once I started talking about the fact that the headset can be lost, we should also talk about the box in which the headphones are stored and charged. He is small and resembles a box of dental floss. The bottom Lightning connector, through which charged not only the box, but headphones. Sit headphones in the box very tightly, and the fixing is installed at the bottom of the magnet. When the earphone almost reaches the bottom of the box, it is literally torn out of his hands and clearly stands in its place. However, to get AirPods because of the strong magnet is not always easy. Headphones get only in one position, then they need to intercept. In order to deploy them after extraction with one hand, take a little getting used to, but it is not critical. But Boxing is a very nice offer. Opening top cover mechanism is reminiscent of the legendary lighters Zippo. The backlash of the cover is minimal, and the reliability of the hinge is made of metal. Fixed cover in the closed position, again with a magnet. 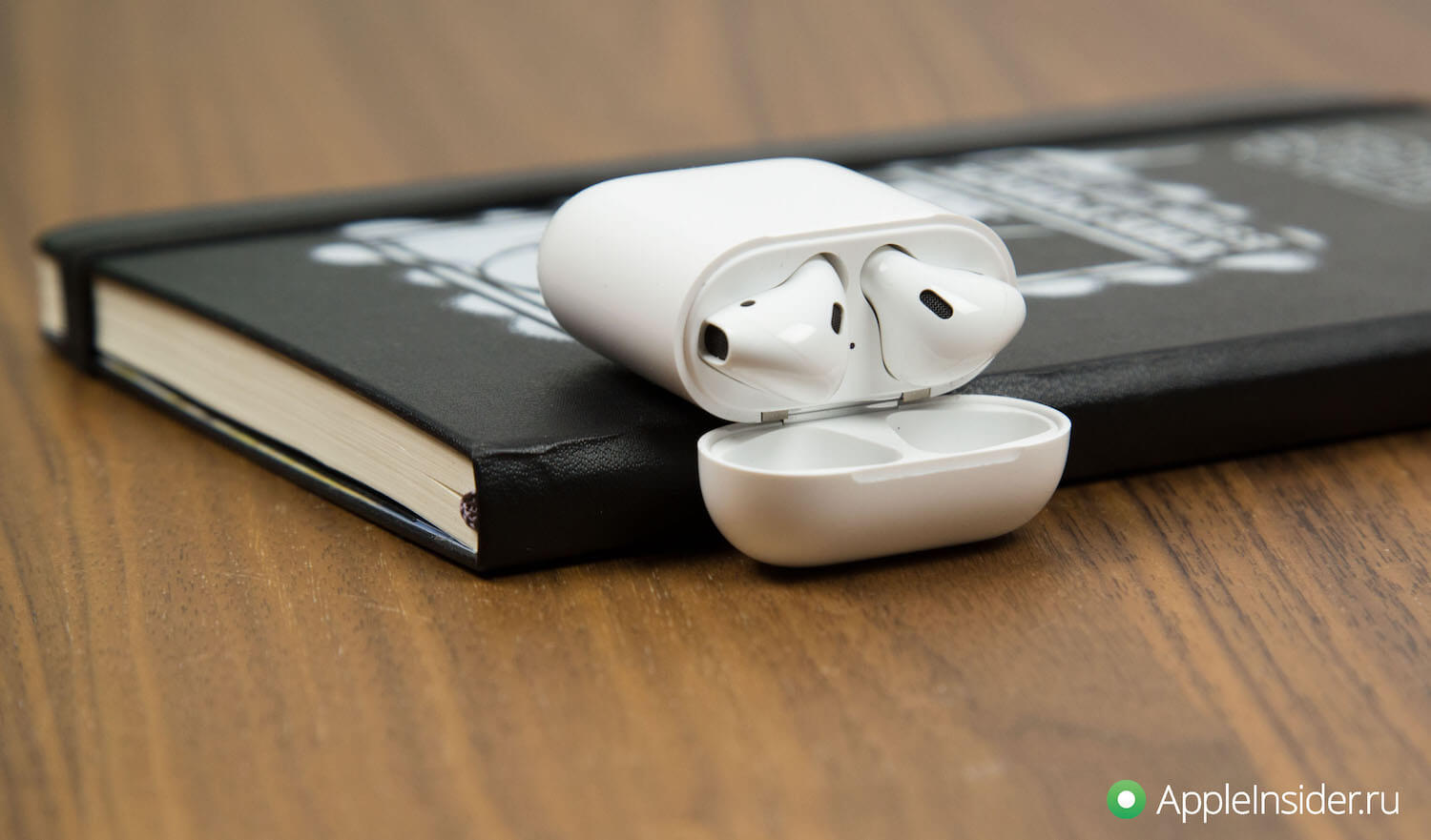 Notice me on the street?

Now all modern people know what the AirPods, because about them a lot lately. But only a few have seen them live. That is why they cause a very keen interest in the street and in transport. Personally, I have not been caught in his interested views of people who have studied AirPods, and sometimes even began to discuss them among themselves. 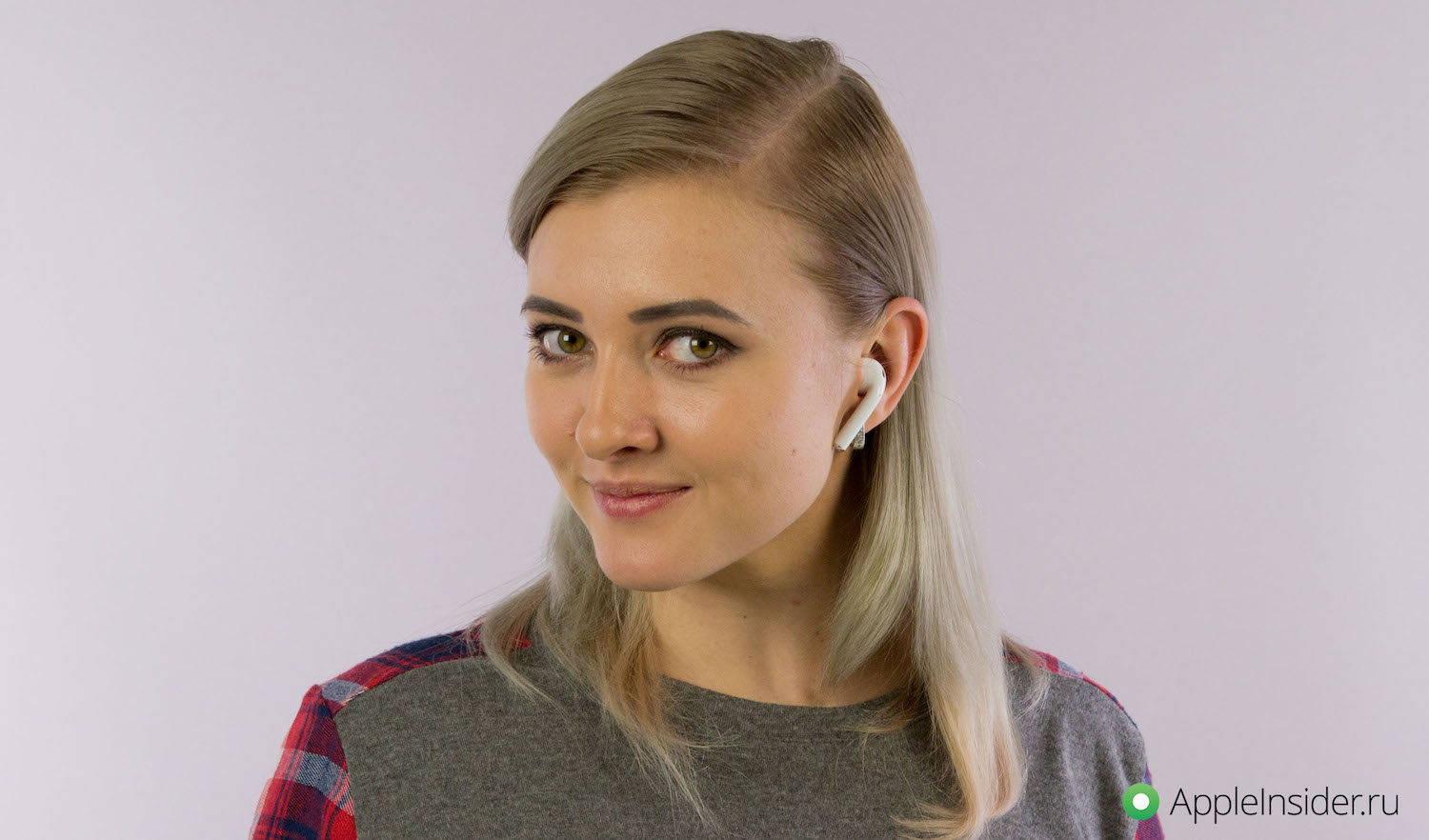 Phone calls, Siri and the office

Phone conversations do not cause any problems. Everyone I talked to said the sound quality is very good, and didn’t always understand what I’m talking to them via headset. In this again the merit of chip W1, which regulates the work of the MICS, knowing when a person begins to speak. And the fact that directional microphones and are in the lower part of the stem of the earphone further reduces background noise and makes the voice clearer. 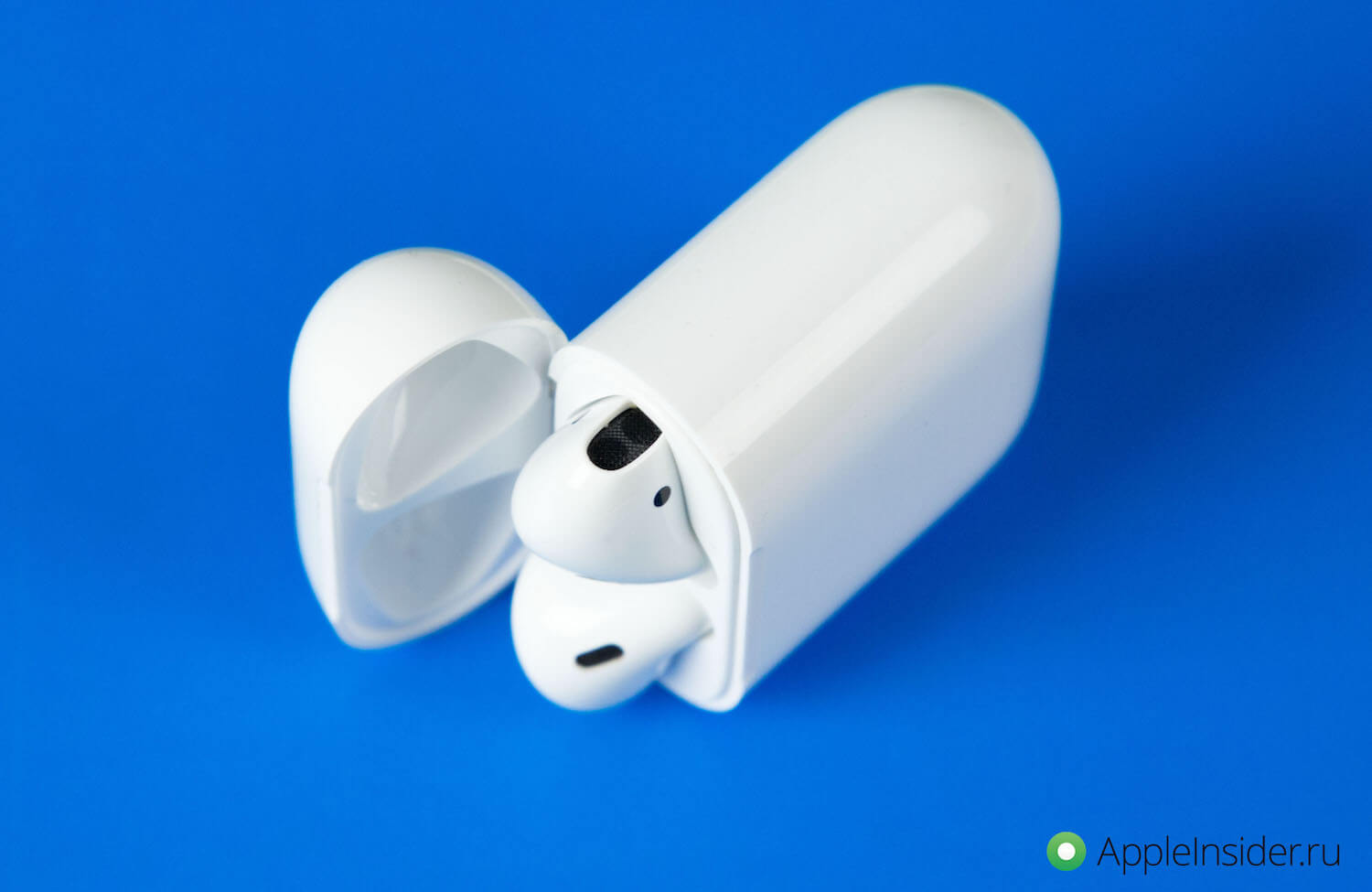 And, of course, with Siri either. She understands all commands and requests. Its challenging enough twice a little knock on any earphone. This action, incidentally, is set, and can be responsible for calling Siri, pause or be disabled. Of the other settings, only disable auto-detect ear when pulling the headset pauses playback, and a selection of the main microphone (left, right or automatic selection). The volume can be controlled from the phone or hours.

We again received a beautiful, high-quality and expensive Apple product. Moreover, the word “beautiful” I mean not only appearance, but all the magic of Apple, which headphones easily and elegantly paired with the phone, and by “expensive” — what headphones are really a lot of money. Yes, there are Samsung and Motorola IconX VERVEONCE that cost the same or even more expensive, but the amount of factors I do not believe that AirPods should cost so much. They are more convenient and better mate with your phone than these options, however, isolating them is not enough, and sports their difficult to call. 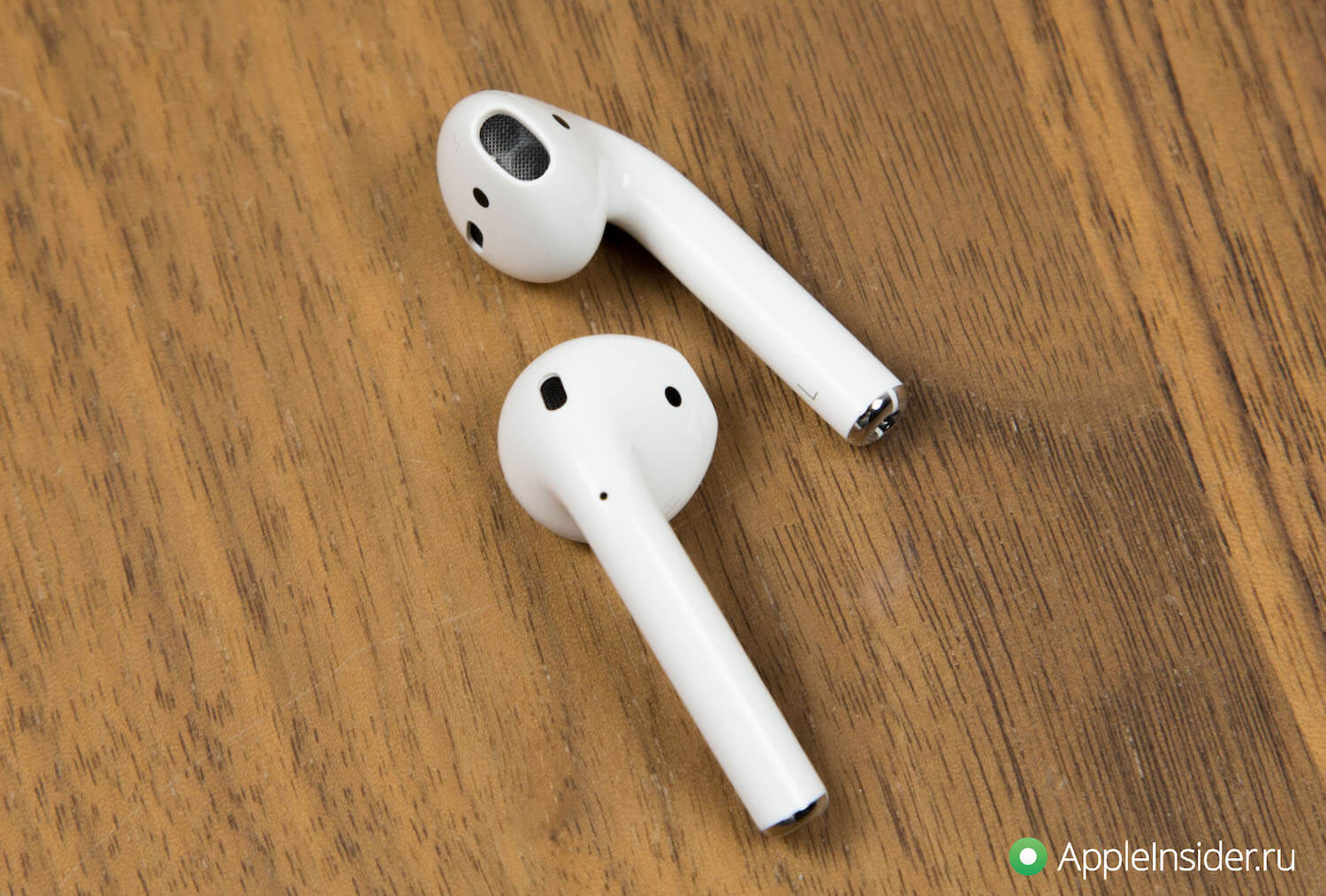 I would advise anyone to buy these headphones? If you use and love EarPods, and as practice shows, a lot of people, then definitely Yes I would. If you don’t particularly like the EarPods, it’s probably not worth it. On average, the difference only in the absence of leads and the consequent possibilities of wireless communication. Yes, I said that they sound better, but in a noisy spot the difference almost disappears. Well as headphones for other phones do not think it is worth to consider them. If you subtract out the common advantages of quality and convenience of articulation with Apple, it will only sound it headphones this price range is better. In any case, headphones, and Apple Watch in the first place are not the separate headphones, but rather an accessory for the iPhone. I would even suggest that if headphones are not very good to sell, perhaps they will be boxed together with future iPhone models. Well, if sales are “off”, that is, of course, unlikely.

However, the headphones made a positive impression. They are interesting, original, enjoyable and remarkable as the Apple Watch in the first months of sales. Well, it’s just a new Apple product, the technology enthusiasts, and especially cupertinos, which is me, is always interesting.

To buy these headphones one of the first in Moscow in the i-Ray.