Goodbye Slide to unlock: an overview of the new lock screen iOS 10

13 June at WWDC, Apple introduced “the major release of the world’s most advanced mobile operating system — iOS 10. The new OS has an updated Messaging app, improved control with a separate section dedicated to music playback, the redesign of Maps, Photos, Apple Music and news, improved management tools in photo library. A major overhaul to the new platform was subjected to the lock screen. 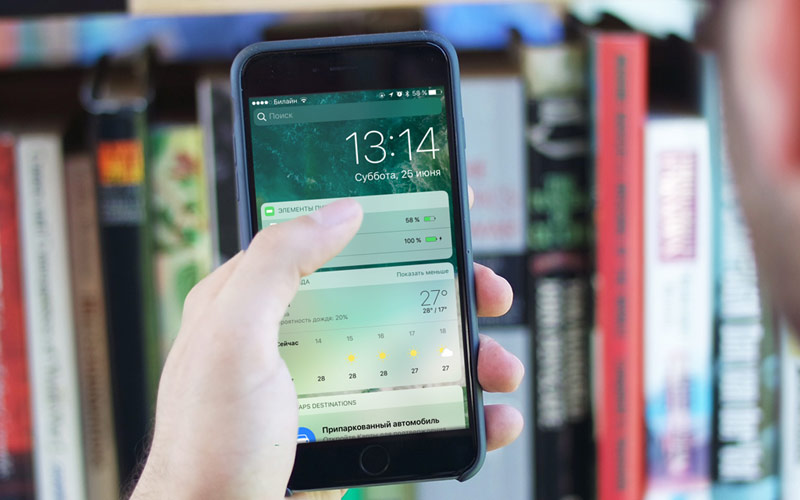 Visual changes on the lock screen iOS 10 become visible in the moment when iPhone take in hand and its screen helpfully included, bringing all unread notifications for missed events. So, now no need to press the Sleep button/Power to Wake up the smartphone.

Farewell to “Slide to unlock”

10 in iOS Apple changed the way to unlock the mobile device. After nine versions of the operating system it’s time to say goodbye to one of the most frequently used functions of the iPhone and iPad. It’s time to abandon the “Slide to unlock” to unlock the gadget: the familiar flick to the right gave way to a new team – pressing the Home button. About it helpfully reminds the inscription “Hit the Home button at the bottom of the screen. 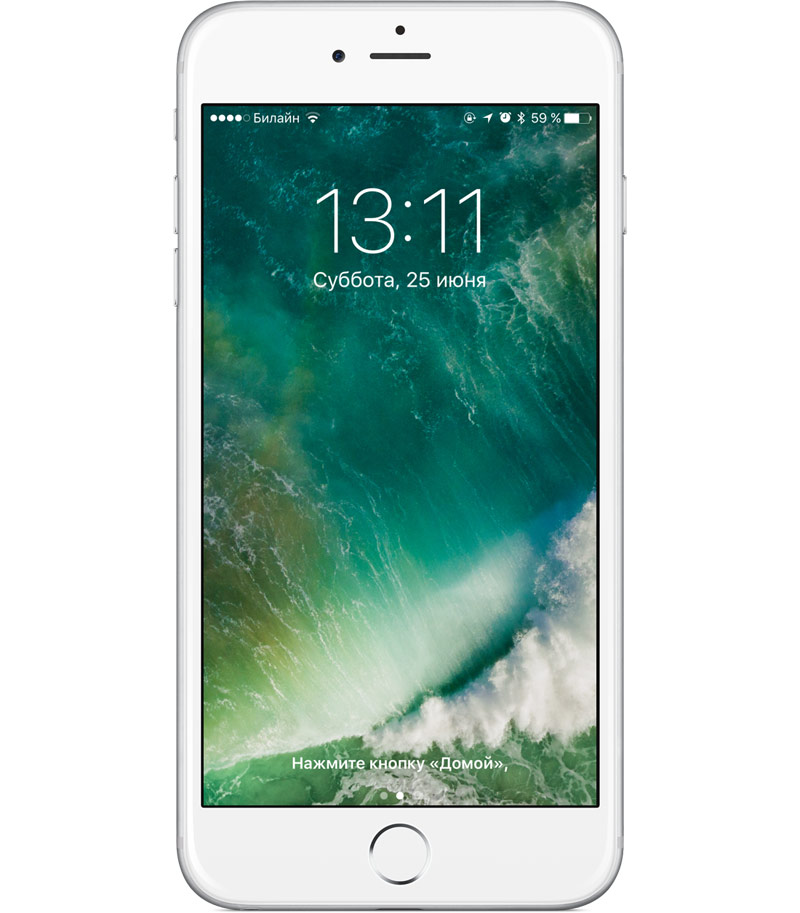 Such metamorphoses with the “Slide to unlock” is quite understandable: with the proliferation of devices Touch ID, users tend to click on the home button of the iPhone, instead of the swipe right to unlock. If your smartphone is not a miracle key for biometric authorization, you are not lucky.

Initially, the new way to access the desktop seems uncomfortable. When you unlock the thumb habit is to do a swipe to the right, thus opening a new panel with widgets. And this is another great innovation of iOS 10.

Swipe notifications to the right instead of the usual Home screen, we see a new panel that iOS 9 was a tab “Today” notification Center. Here is a set of widgets “Weather”, “Stock”, “Prompts Siri”, Apple Music, Photos and more. The panels themselves are presented in an updated format. 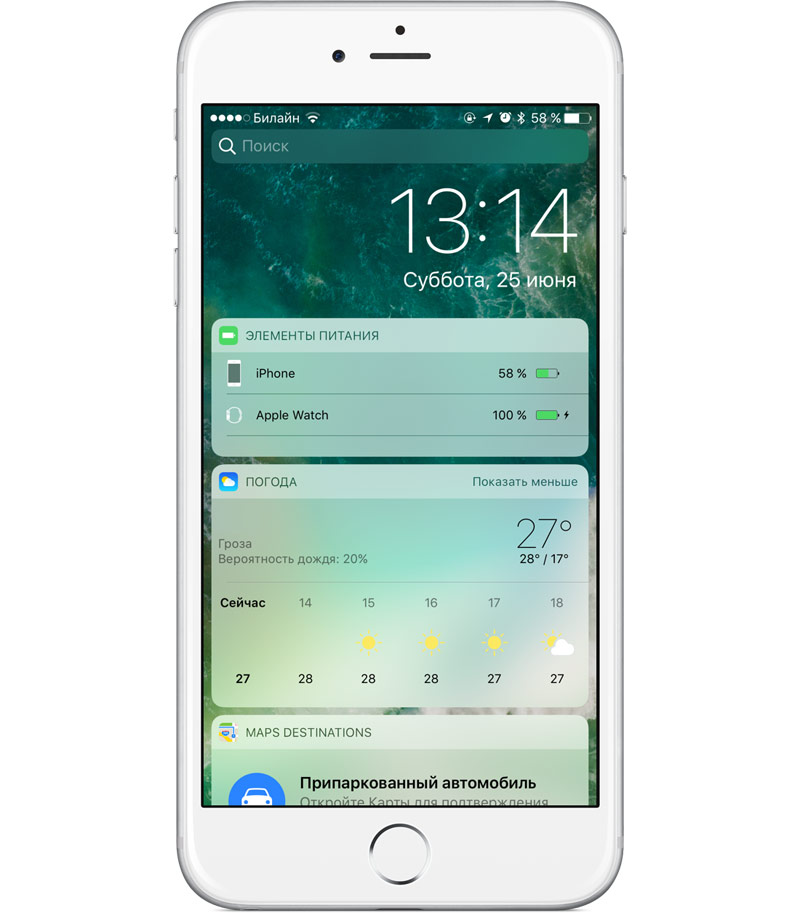 Widgets have become larger in size and placed in blocks the effect of frosted glass – each widget in a separate window. Old widgets for notification Center iOS 9 supported in the new system, but look sloppy. If the content does not fit in a standard block, the data is just truncated. Application developers will have to rework the design of the widgets for the new day, and users some time to get used to the new appearance. 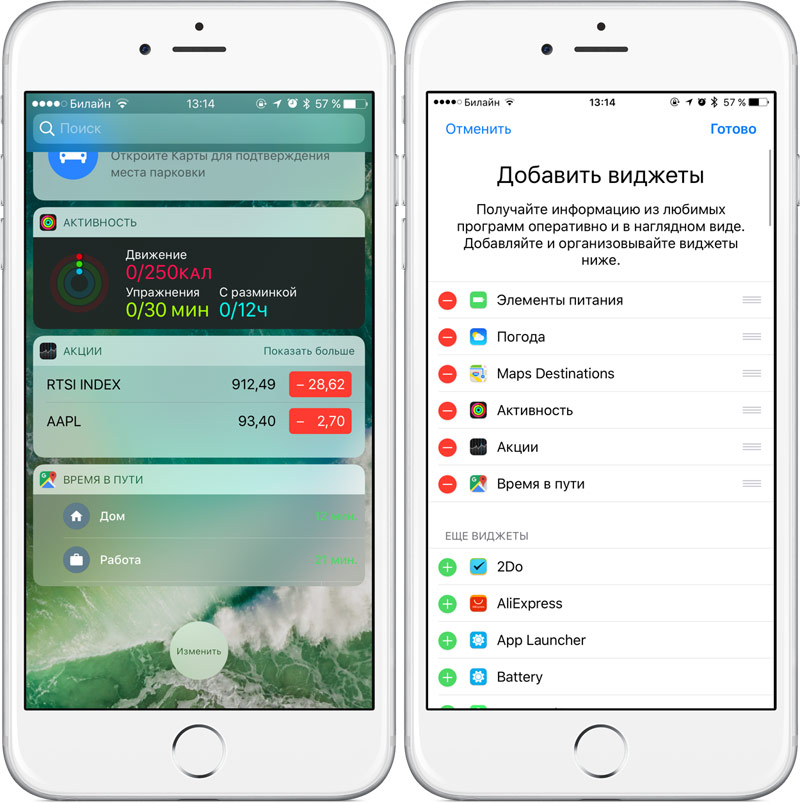 The number and order of widgets can be set as before. Click the “Edit” button, click the plus sign next to the desired widget and confirm with the finish button.

If you swipe the main shutter to the left opens the camera, and this new approach fine motor skills users will also have to get used to. Before the camera opens with gesture swipe up from the bottom right corner. Now you do not need to aim for the button, but the gesture is quite unusual and requires getting used to. 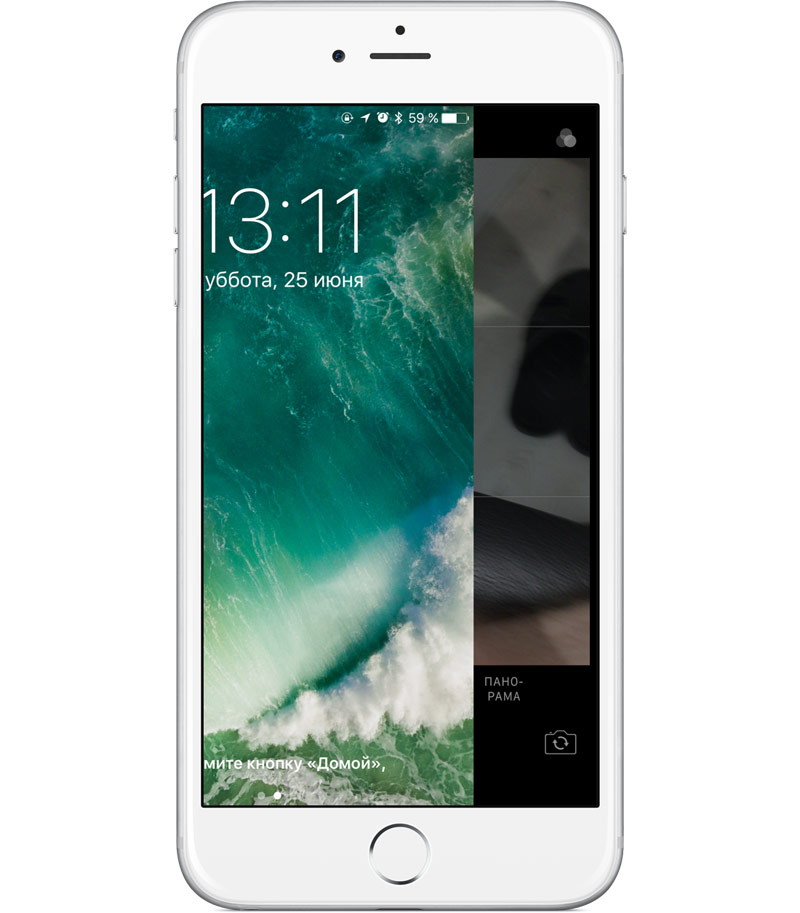 Without leaving the lock screen iOS 10, can be pulled on top of the third panel under the title “Missed”. Some time ago she attended a bookmark “notification Center” in iOS 7, but they were deemed irrelevant and subsequently removed from the system by Apple developers. 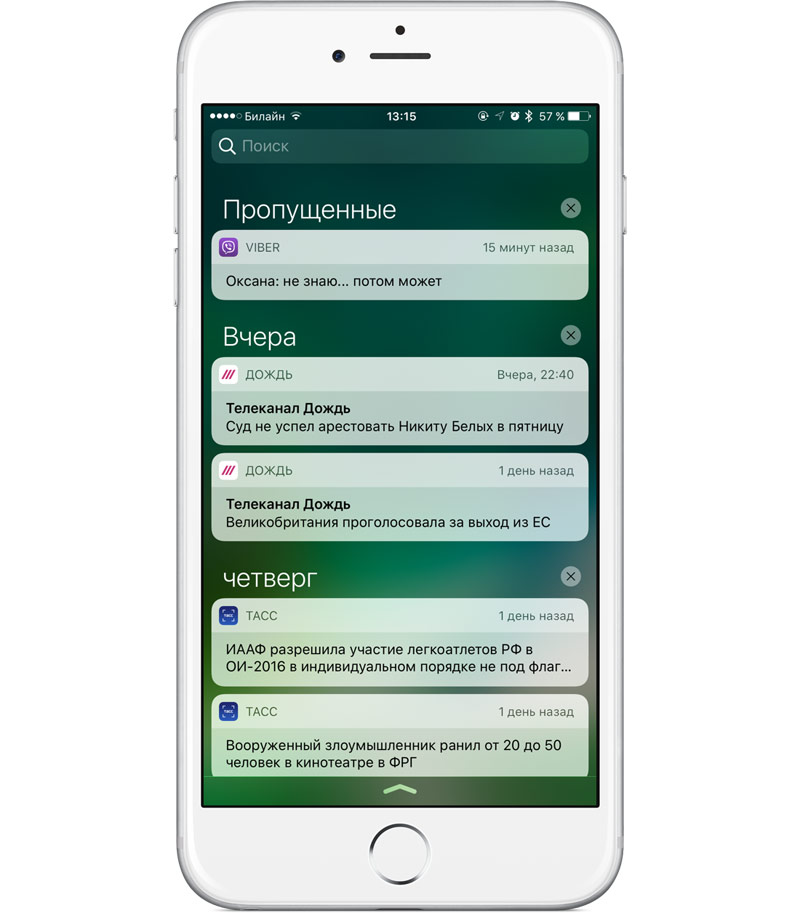 In the section “Missing” iOS 10 shows ignored all notifications, sorted by date and time of receipt. But, unlike the previous versions of notifications, the list is clear as a whole, not each date individually, one touch 3D Touch on the very first clear button, so there is a new option “Clear all”.

While playing music, the lock screen changes. Also as for iOS 9, display of interface elements to control playback. In General, the screen looks like the previous version, but with minor changes. The text became larger, increased distance between the sliders, changed buttons fast forward and rewind. Small vertical line is the playback slider gave way to white point. 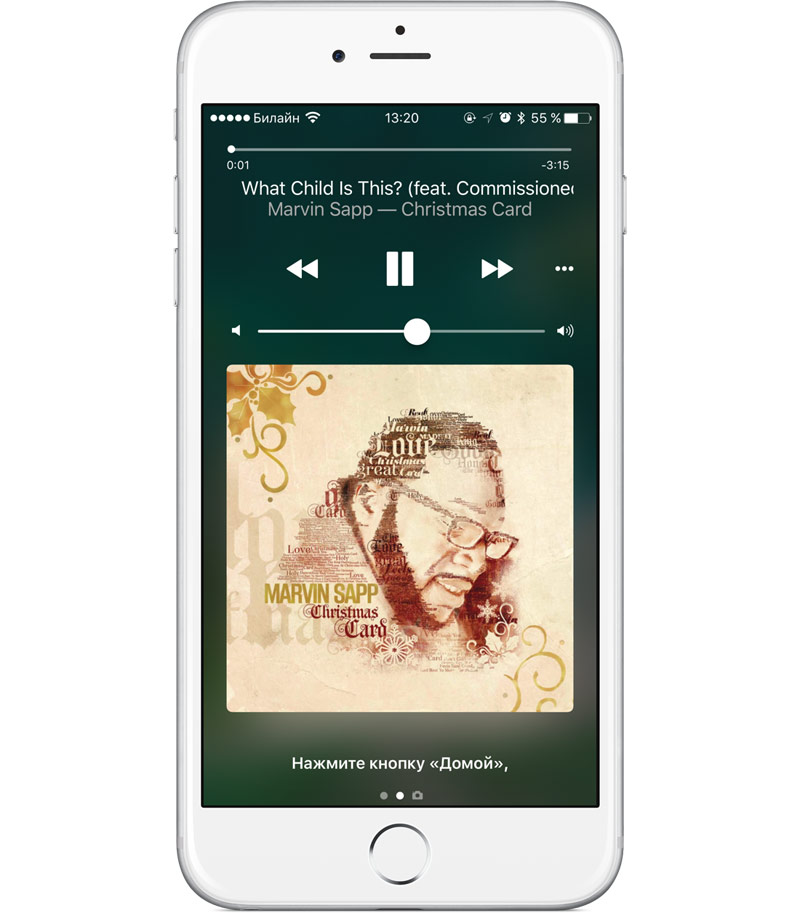 If you click pause, the album cover is slightly reduced in size. After playback, the picture returns to its previous size.

While on the lock screen, familiar movement to pull the bottom of the screen “control Point”, which now looks a little different. You can now toggle between three functional sections to manage system settings, music devices and smart homes. 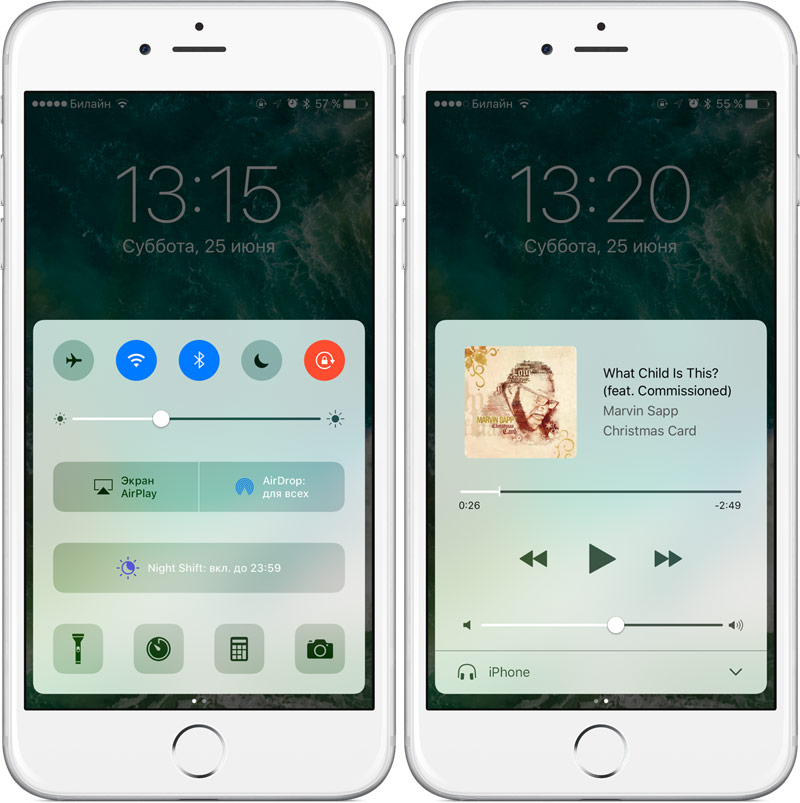 In the main section are five icons quick settings: airplane mode, Wi-Fi, Bluetooth, do Not disturb and lock rotation of the screen. Button switches to become colorful, the brightness slider in place. Came key quick include Night Shift. Button “AirPlay”, which broadcast images from iPhone and iPad screen on Apple TV renamed to “AirPlay Screen”.

If you make a swipe to the right will open a new section control to control music. Here all no surprises: album art, song name, artist name, time slider with playback and volume, buttons control playback. If you configure the app on “Home” in control center iOS 10, will be available in the third section HomeKit. It lists all devices “smart home”, associated and registered with iCloud.