The day was interesting. The lack of money from the first buyer, guests from abroad and the excellent work of the organizers, as the capital hosted the start of sales of the new iPhone XS iPhone XS Max and the Apple Watch Series 4. 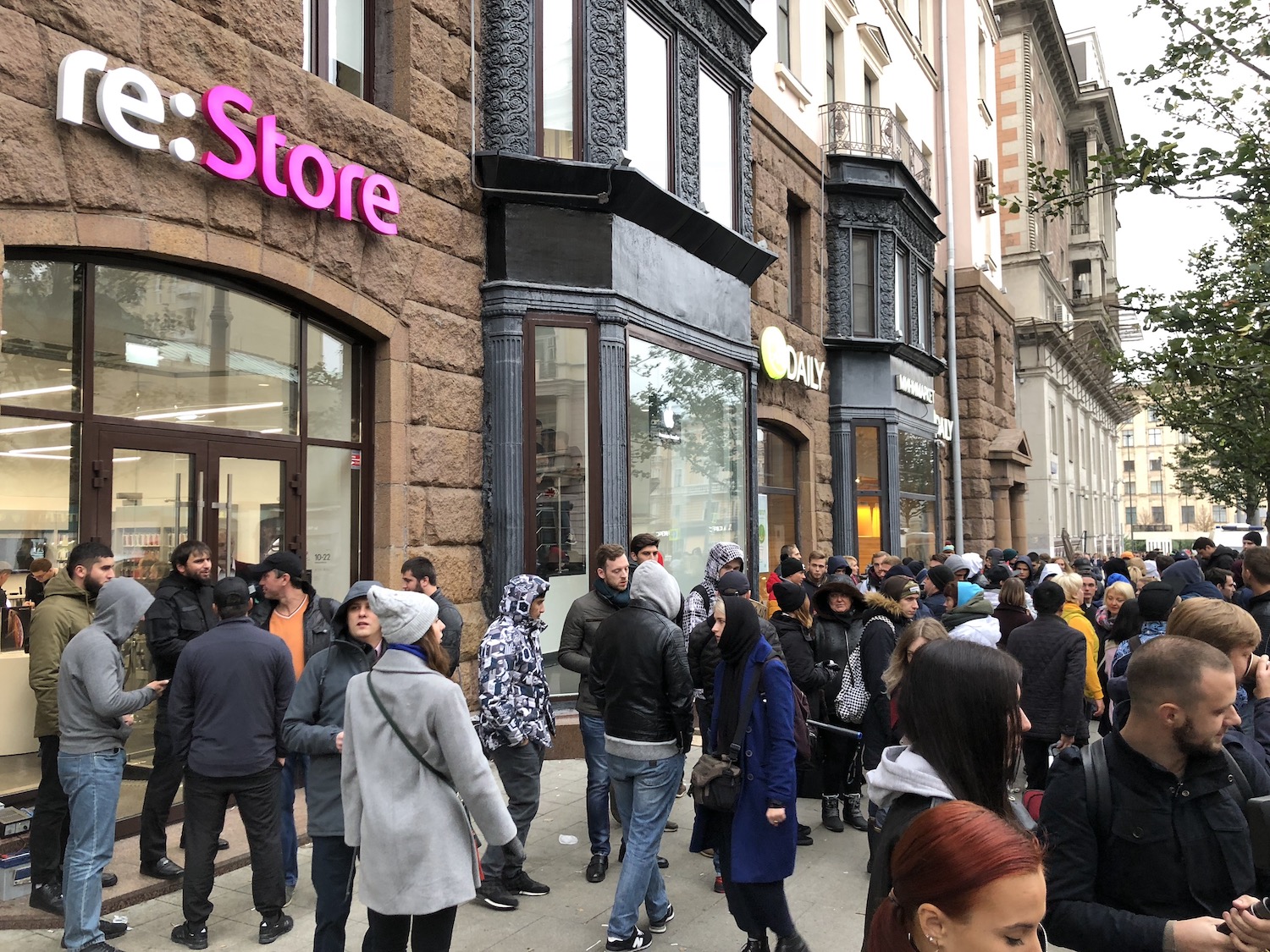 By nine o’clock in the morning of September 28 near re:store on Tverskaya gathered a large number of people. However, the crowd began to gather another 5 days before when buyers eager to be the first organized line for a new iPhone. At the beginning of the numbering in the queue was regulated by the buyers, however, some time before the start of sales, the shop itself began to issue numbered coupons, in order to avoid disputes and stampede at the time the store opened. For this purpose, before the opening of the store in the morning, before the entrance stood a few people of Caucasian nationality with a very severe look, as if hinting: “just act normal and everything will be fine”. They were employees of the store and faithfully performed their duties — no one but employees and journalists ahead of time in the trading room were not included. 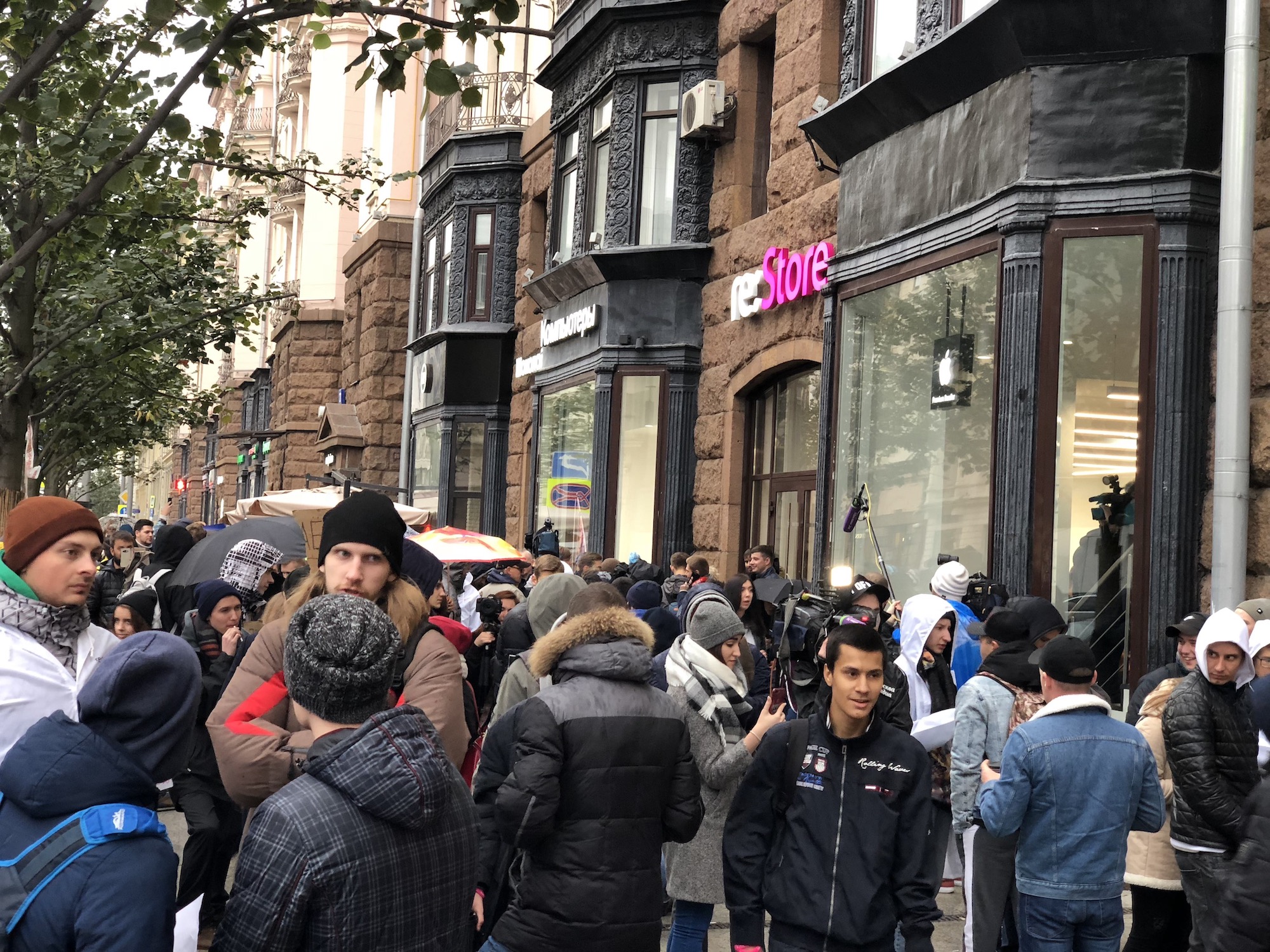 The guys who stood in line the day before the event, only to eventually sell my place told a bit about what happened at the store. According to one of them for first place in the list of proposed 700 thousand rubles, but lucky refused, hoping that it will offer more. Which is why the smartphone has not acquired and the queue is not sold. 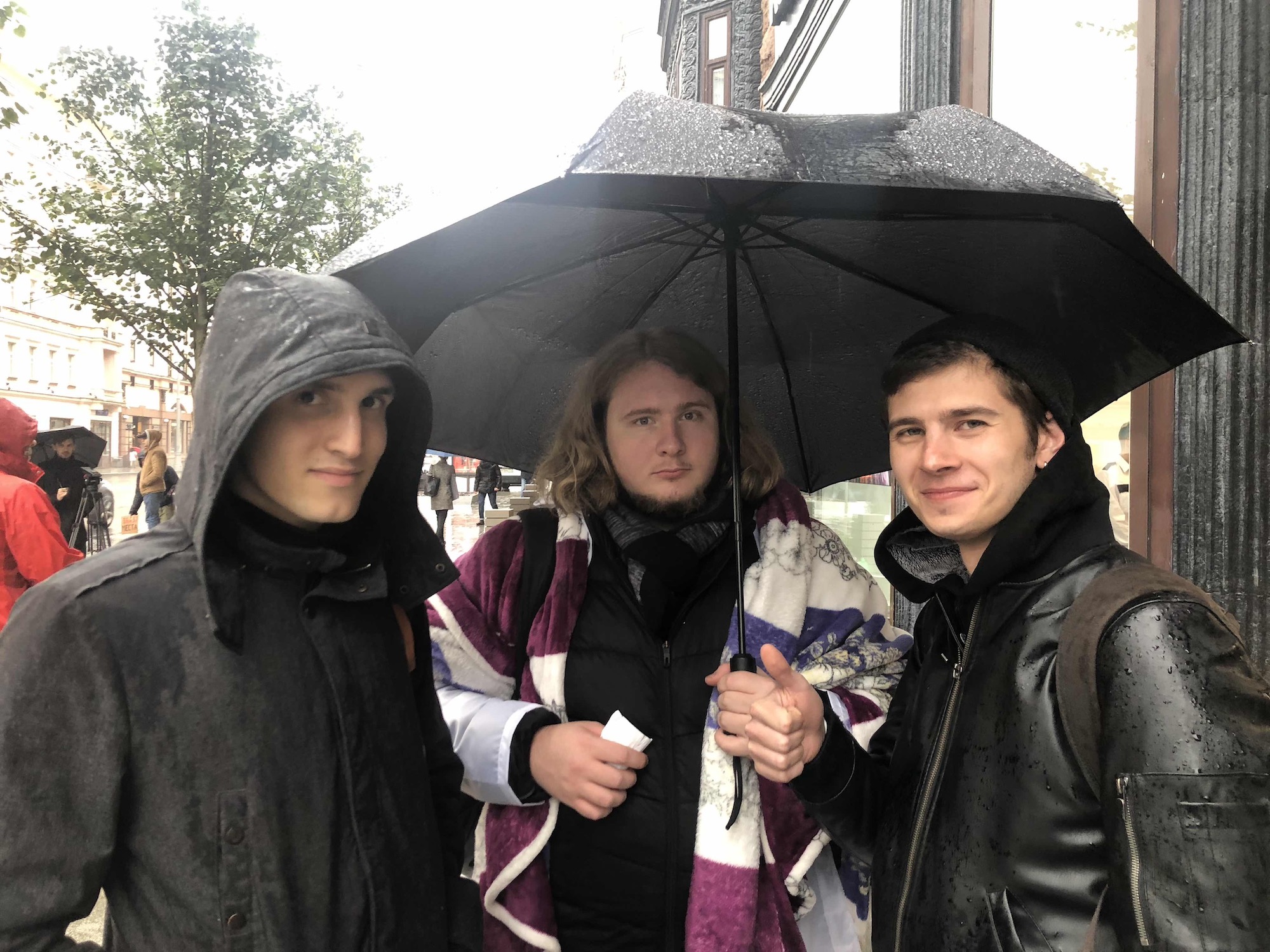 The event was actively covered by the media. Among the most famous TVC, RBC, Friday, news. In the crowd were bloggers, for example, I noticed Natasha and Dima Size of the proud. While journalists outside interviewing people in the queue, their colleagues inside actively filmed on camera new device and preparing for the launch of the first happy buyers. 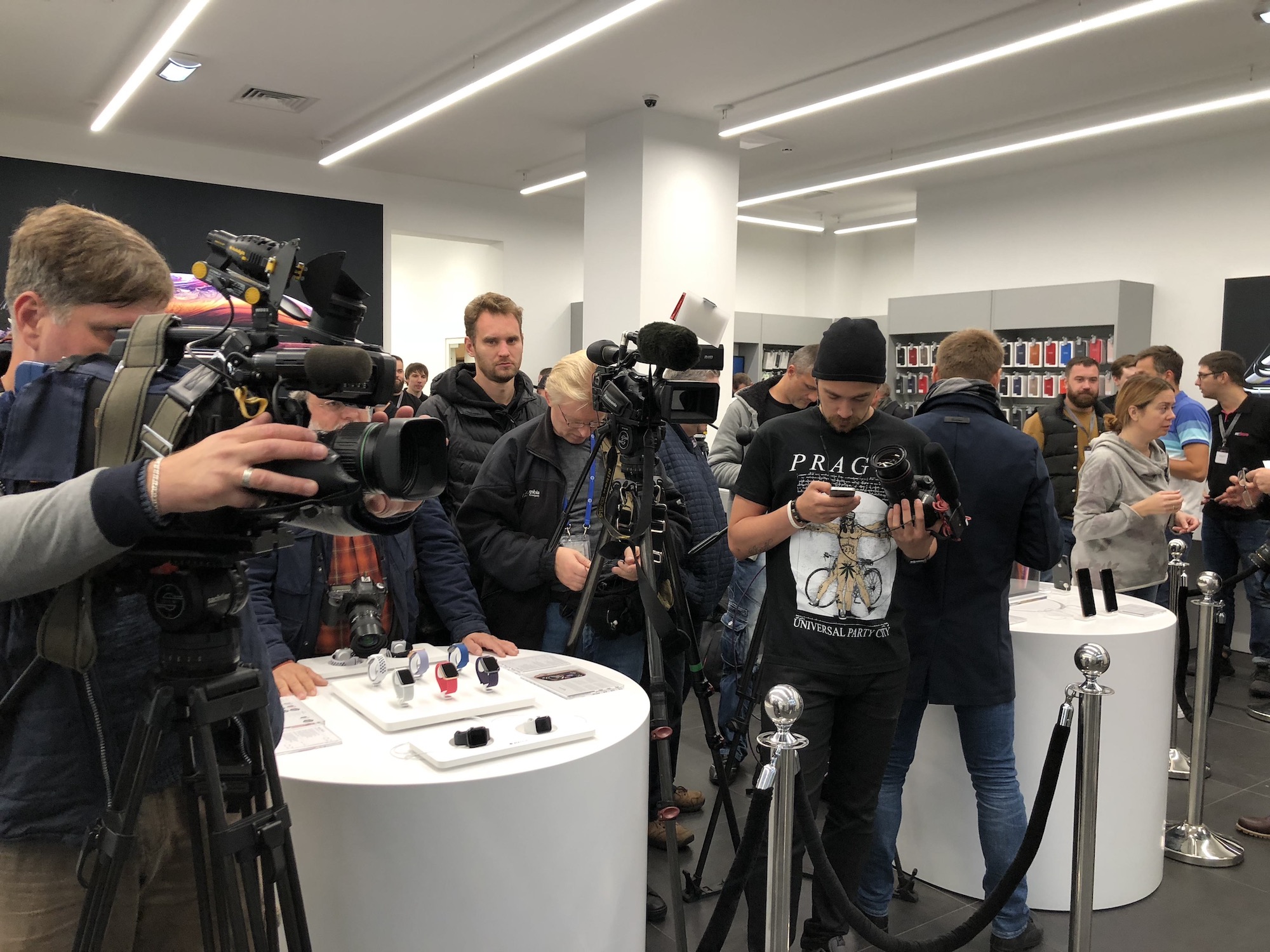 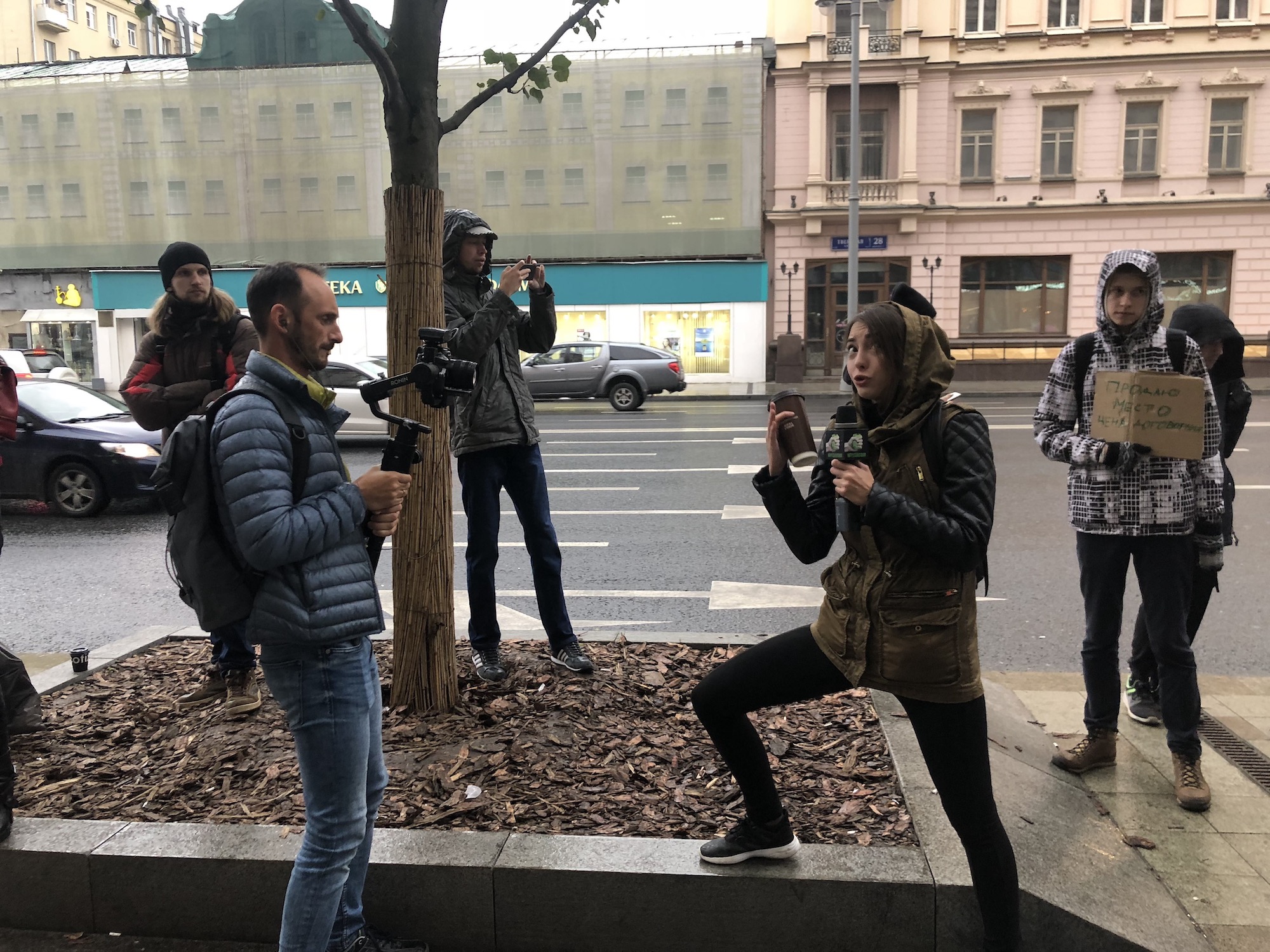 The interior of the store was fully prepared for the start of sales. On the walls hung images of new devices, but demo stands for smartphones and watch could touch or try on. Press Secretary re:Store Lyudmila Semushina said that the preparation of the trading floor was going all night, just after Apple removed the prohibition on opening packages. She also said that the organizing team, given the experience of last year tried to prevent any possible areas of concern. Worked in the shop heavy security, near to re:Store was on duty ambulance, the police, and waiting to open on the street handing out raincoats and free coffee. 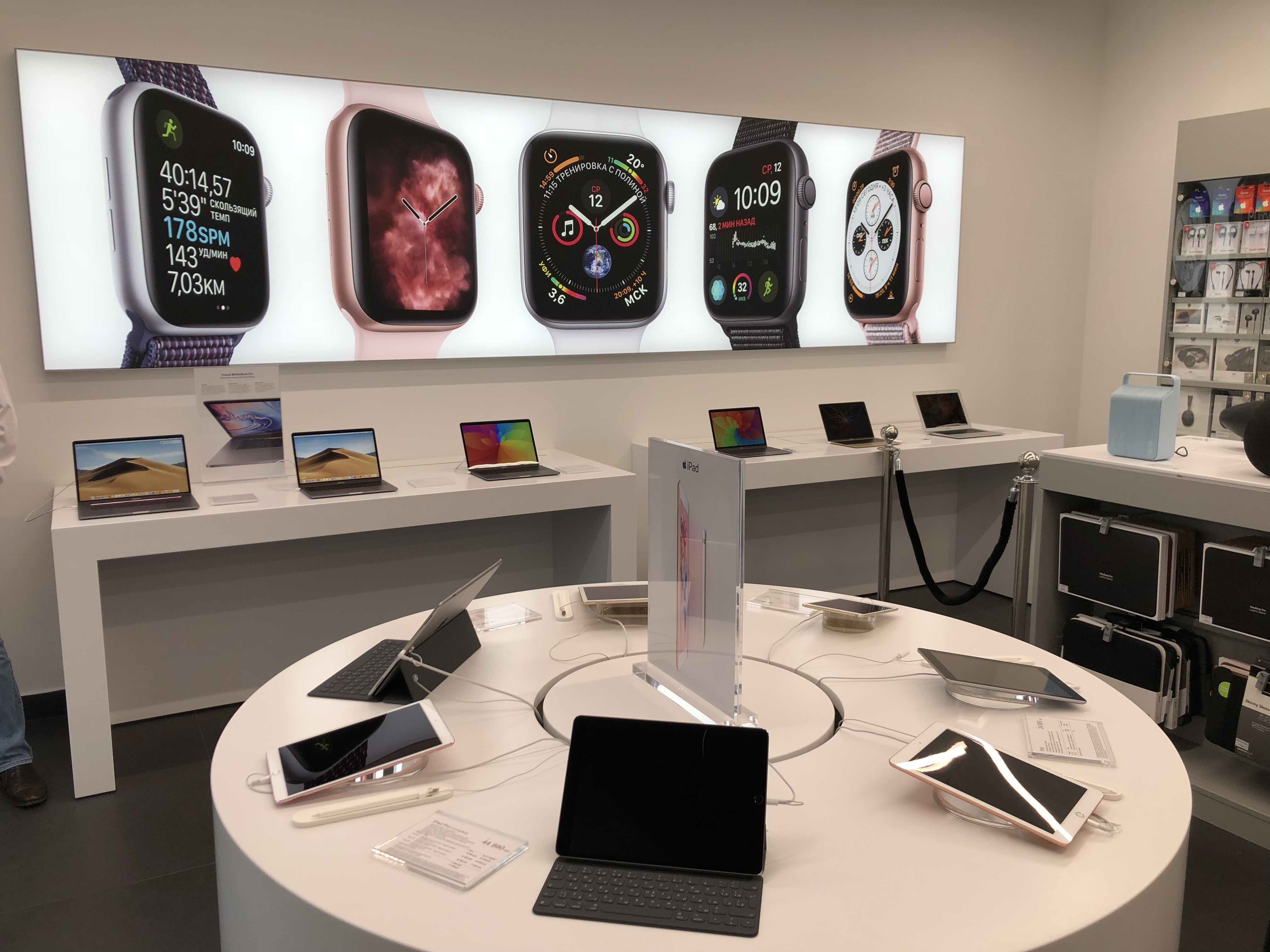 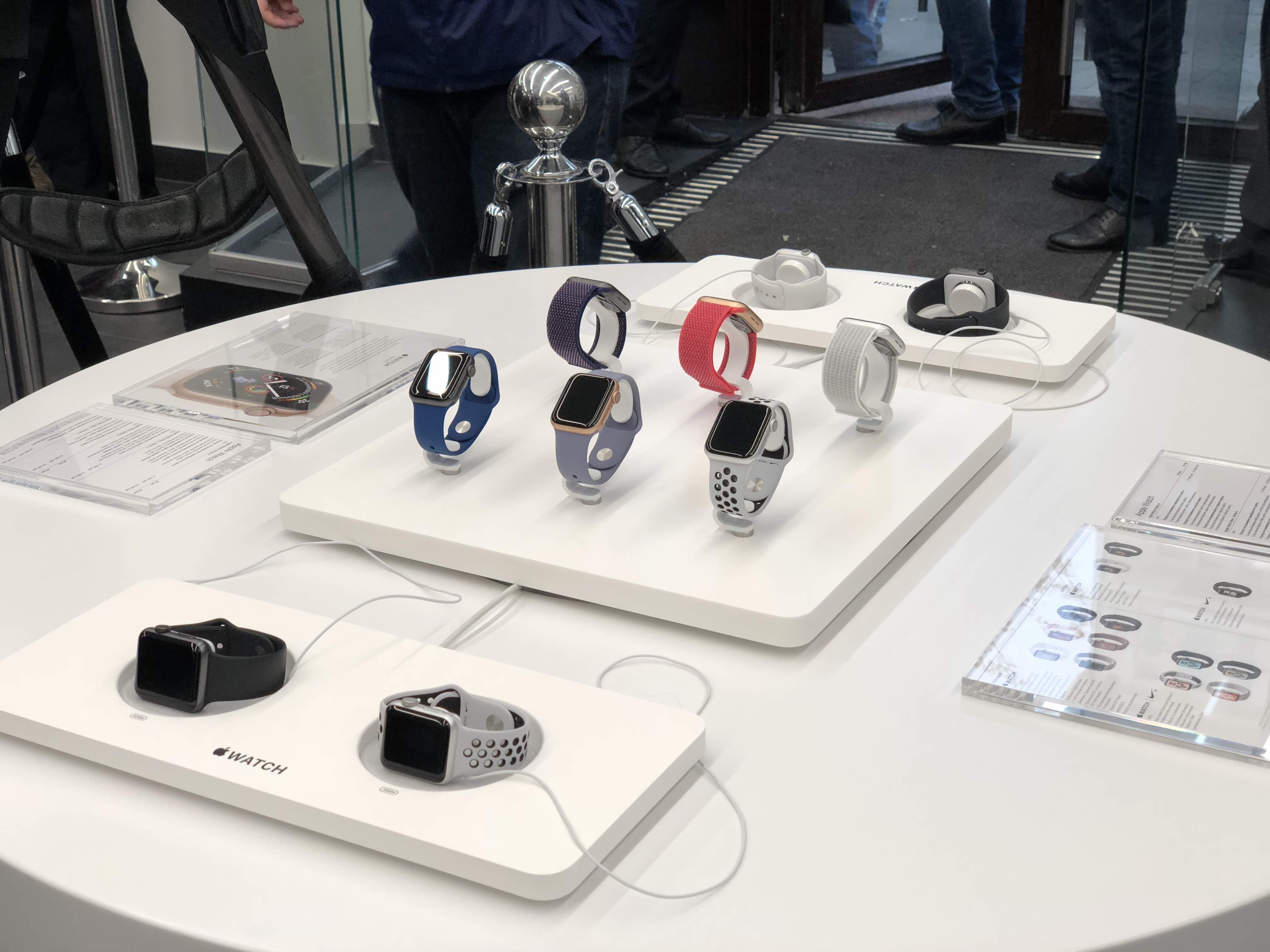 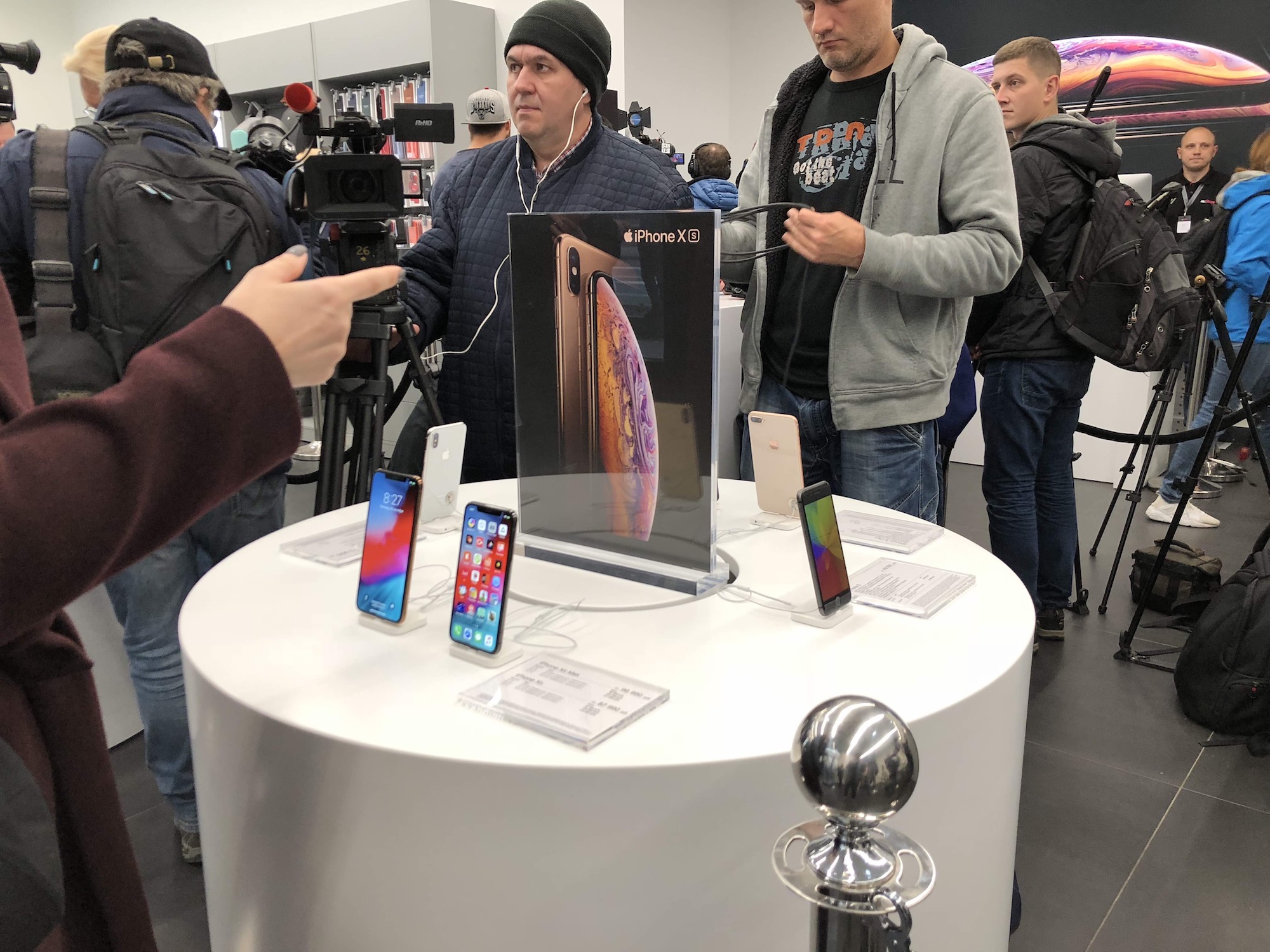 If you ignore the media, people outside of the store, divided into 2 camps. First I wanted to buy something (new iPhone or Watch Series 4), and the second to sell something, for example, a place in the queue, or iPhone imported from abroad. One of the last I was able to talk. The guy was selling the iPhone XS, bought in Germany in a sealed box. In the case if nobody wanted to buy it — the guy wouldn’t have the smartphone own and tried to sell more, but my iPhone 6s, it’s possible he would have changed it to XS. 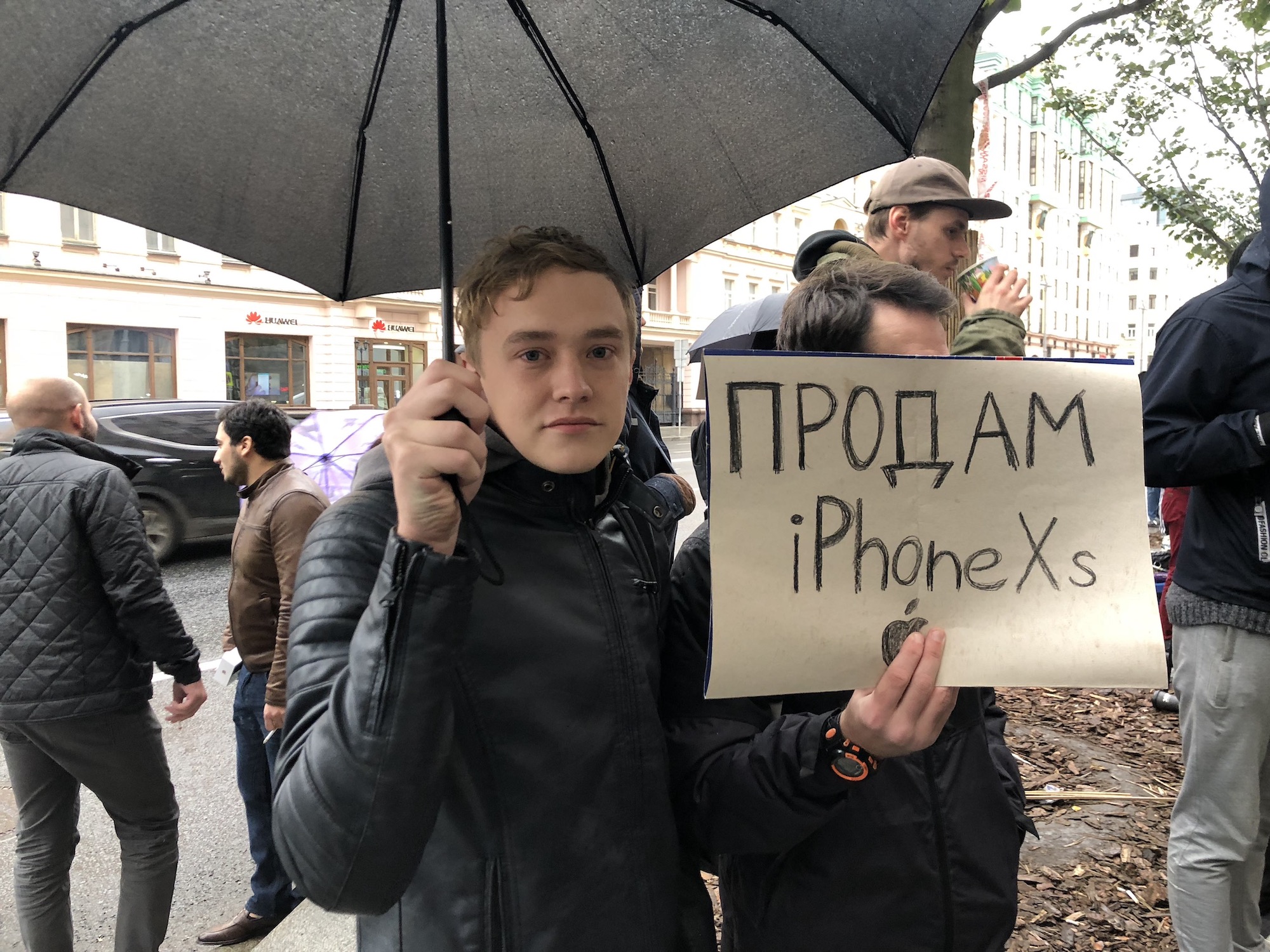 By the way, the aforementioned blogger Dima Gordey already has purchased a gold iPhone XS Max 512 GB, also in Germany. “In principle, the phone is no different from iPhone X, only became more and camera a little better. Their money it is just not worth it”, — shared his impressions Gordey.

The time has come “hour x” and most of the media is located in designated areas of the trading floor, so as not to disturb the customers to move around the store. And then, we can say, not everything went according to plan. After invited first visitor, there was a hitch. The inside of the shop was not visible, why no one comes, but only then, the witnesses who were outside, told me that the owner of card #1 immediately after the start of sales ripped a piece of paper in front of everyone and went about their business. The act that I do not quite understand, if you know or guess why it happened — write in comments. For two and a half minutes, the store stood waiting, and now, happily went moment. What is unusual is that in turn it was the ninth, and still unknown, where did the first 8 people. The man said that the place in line he bought for 50 thousand rubles and went to the cashier asked to see his new smartphone. He probably didn’t know when buying turns a smartphone is not a gift. For it was a surprise that for this device, the purchase of which, according to him, he pointed in the morning, we still have to pay the money. Due to the fact that sufficient funds have men was not with him, he answered some questions of journalists and hurried off. 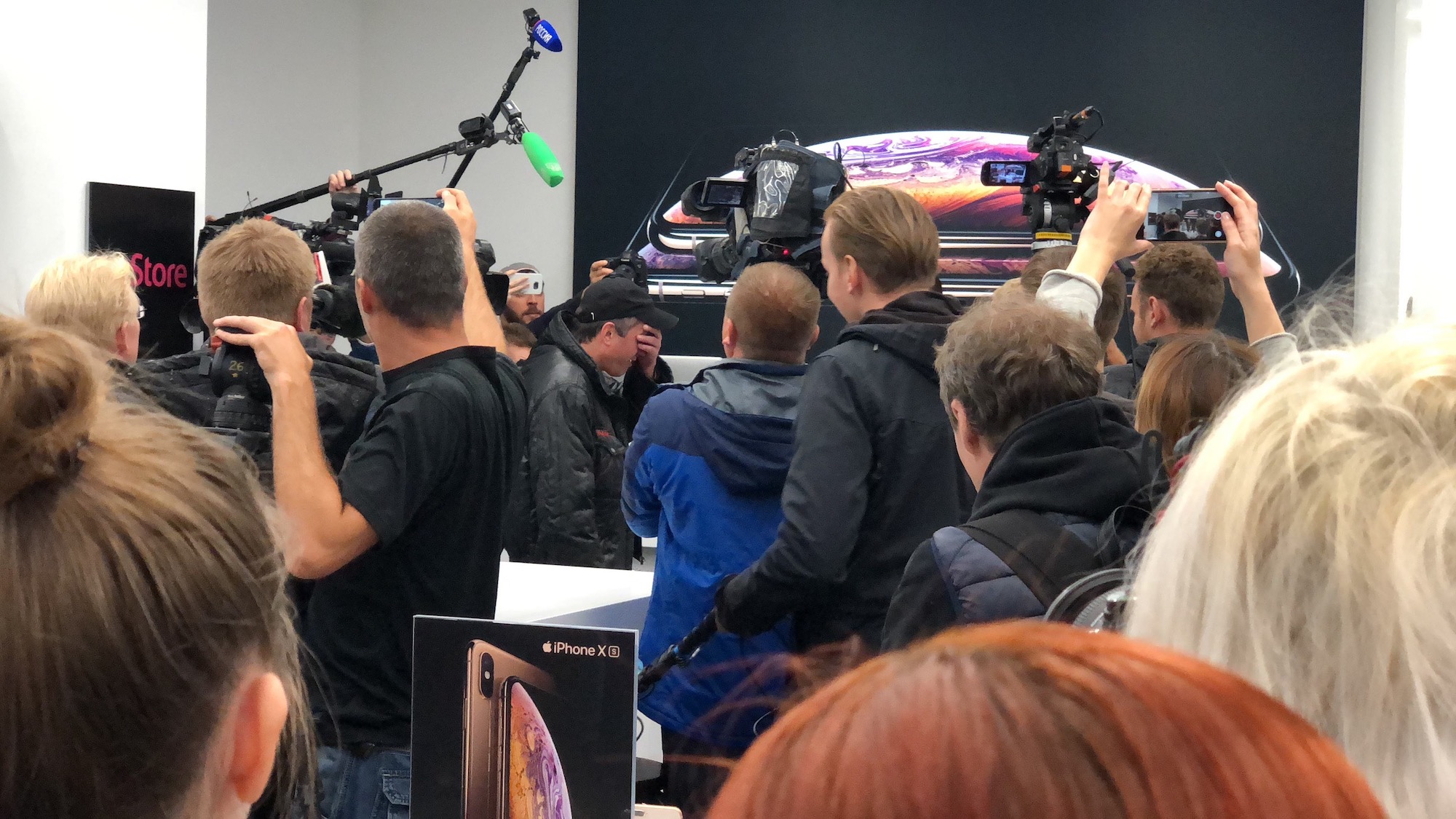 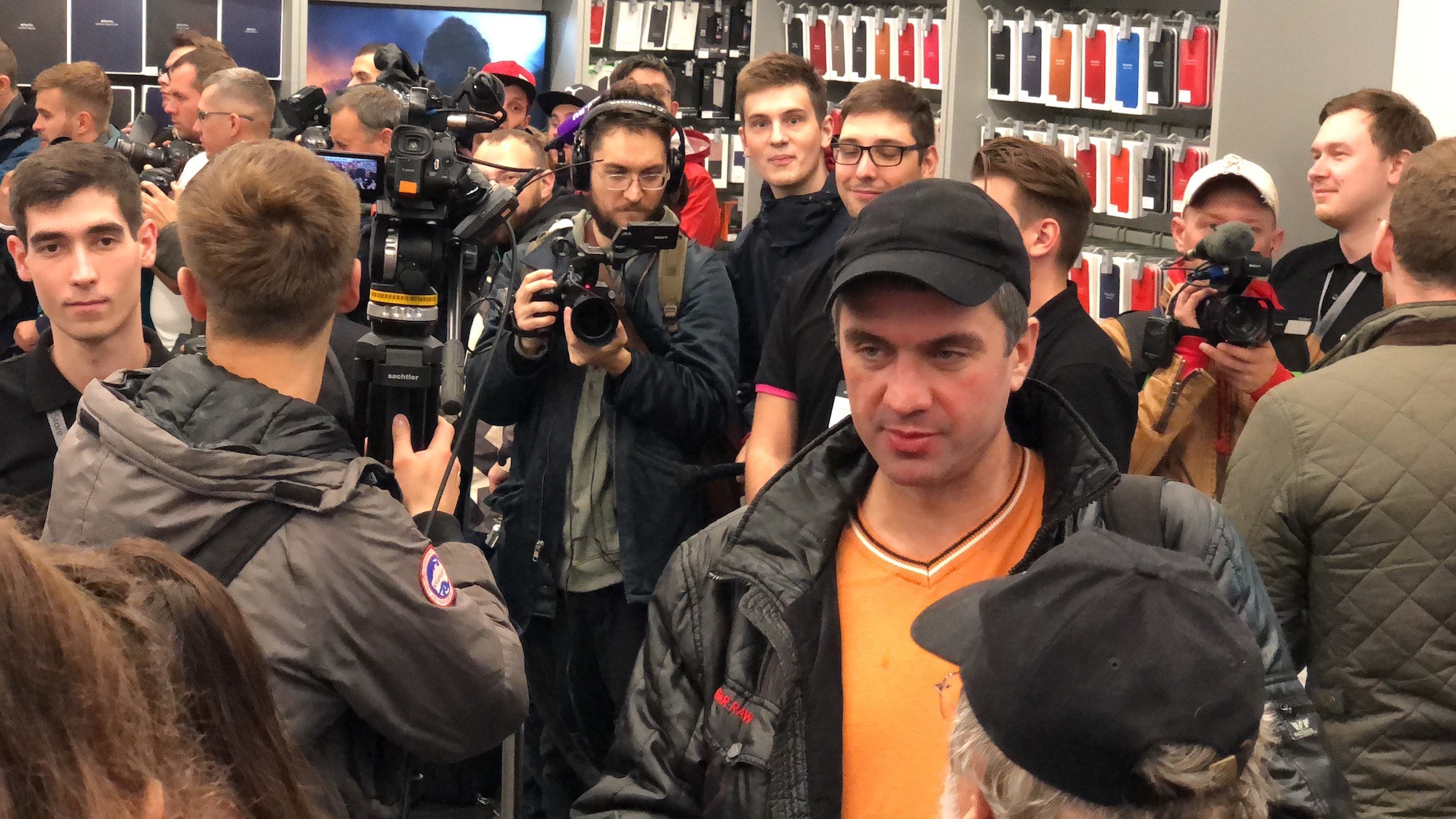 The first real buyer was the other man, but he did not give the press many comments. It was fast, went in, paid, took the device and headed for the exit, as the guards of the hall asked him not to linger in the store, not to create a stampede among journalists, who immediately pounced on him. 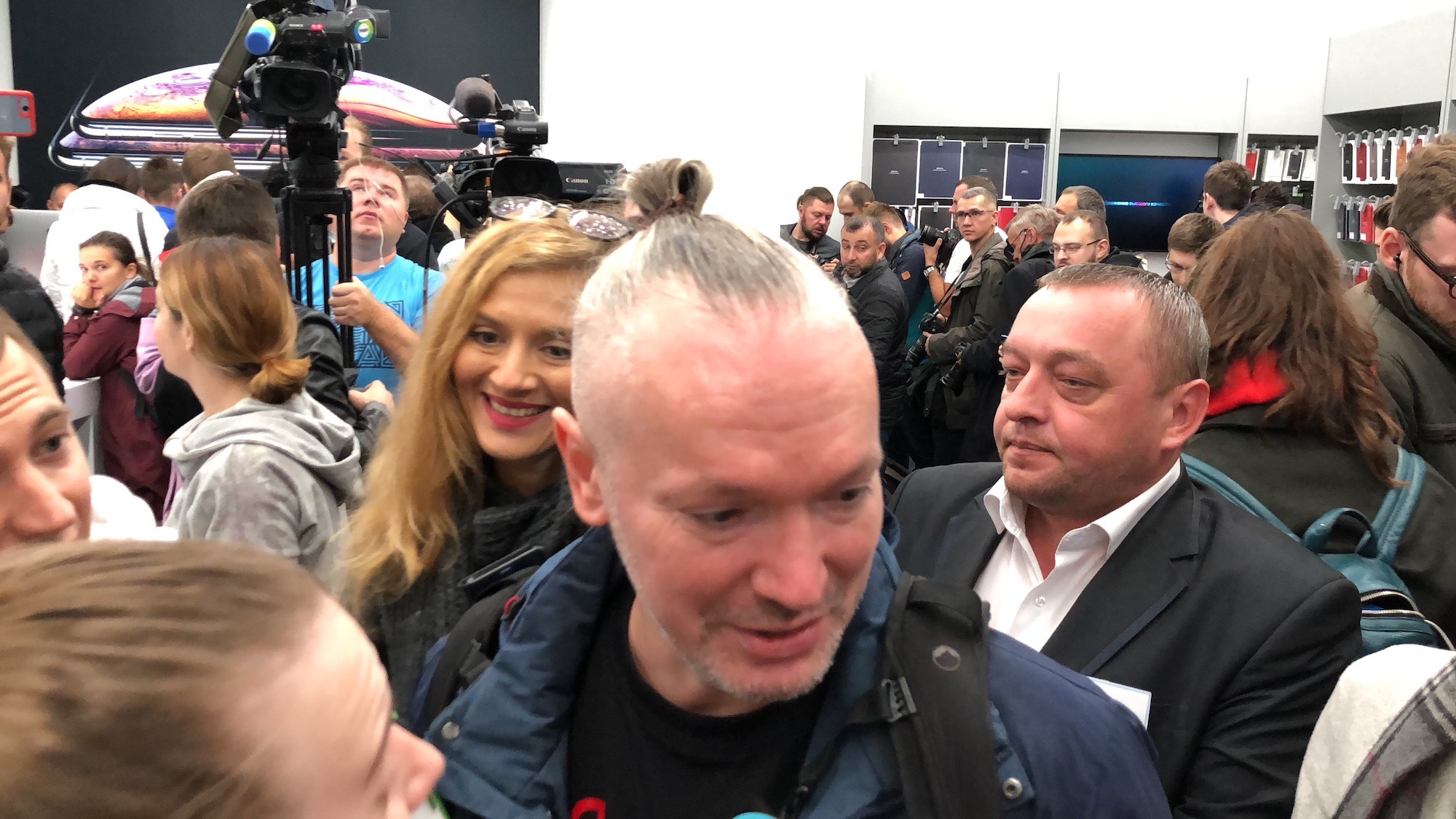 After that, the media feeding frenzy has noticeably declined, wishing to go to the store, deciding what model to choose and buy. Group of black guys bought a few smartphones and a watch and asked immediately to equip new vehicles with protective glazing. Antonio, one of the guys said that the iPhone XS Max used the iPhone 7 and Apple Watch Series 3 I do not plan to. He believes that to change the device necessary, the most optimal time in two years. His friend, Lorenzo, purchased the same smartphone to replace my Vivo, and I think the Apple Watch Series 4. Among the first buyers was a girl who, as claimed by our colleagues-journalists, last year was one of the first purchased iPhone 8 Plus at the start of its sales. 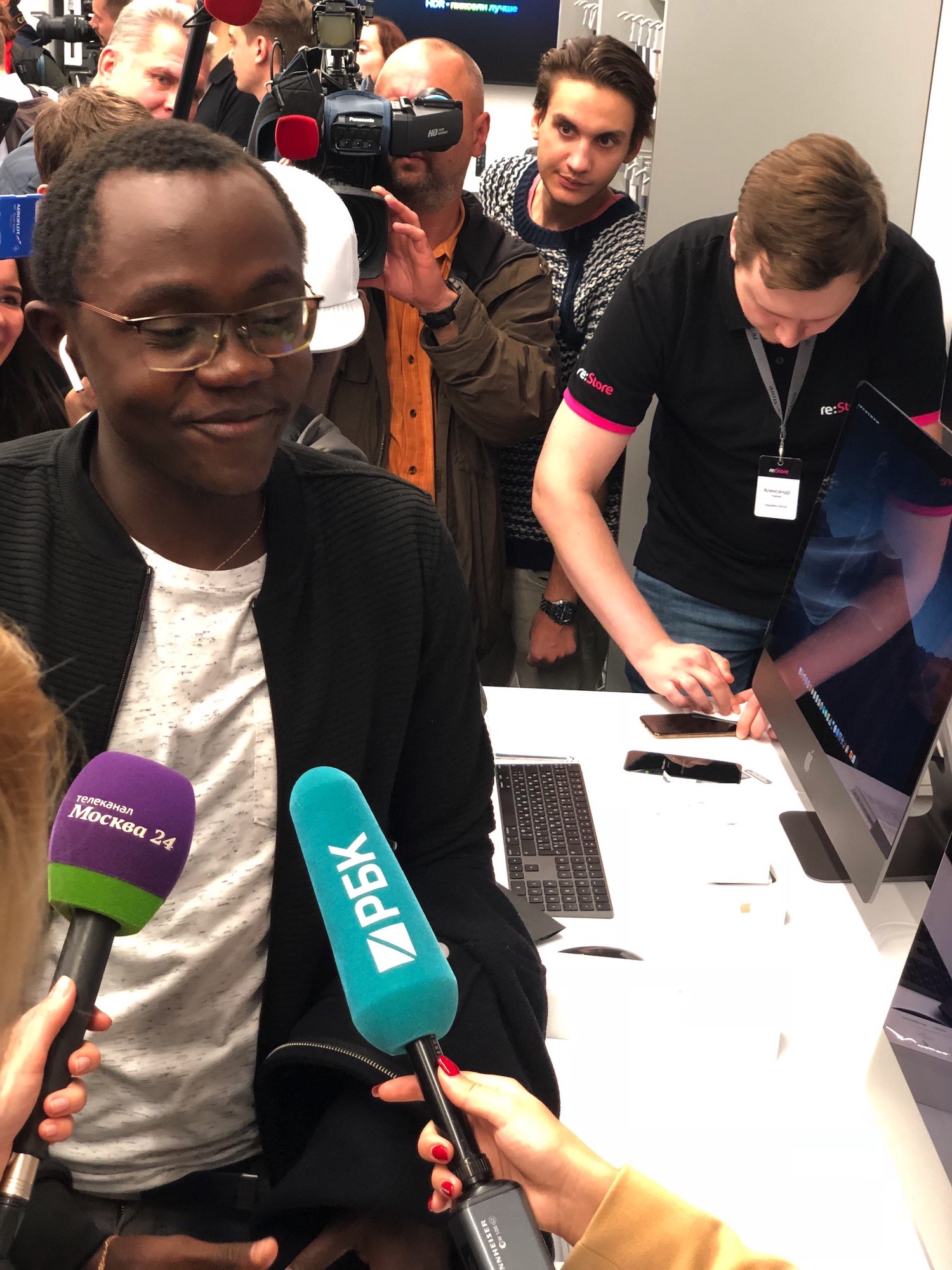 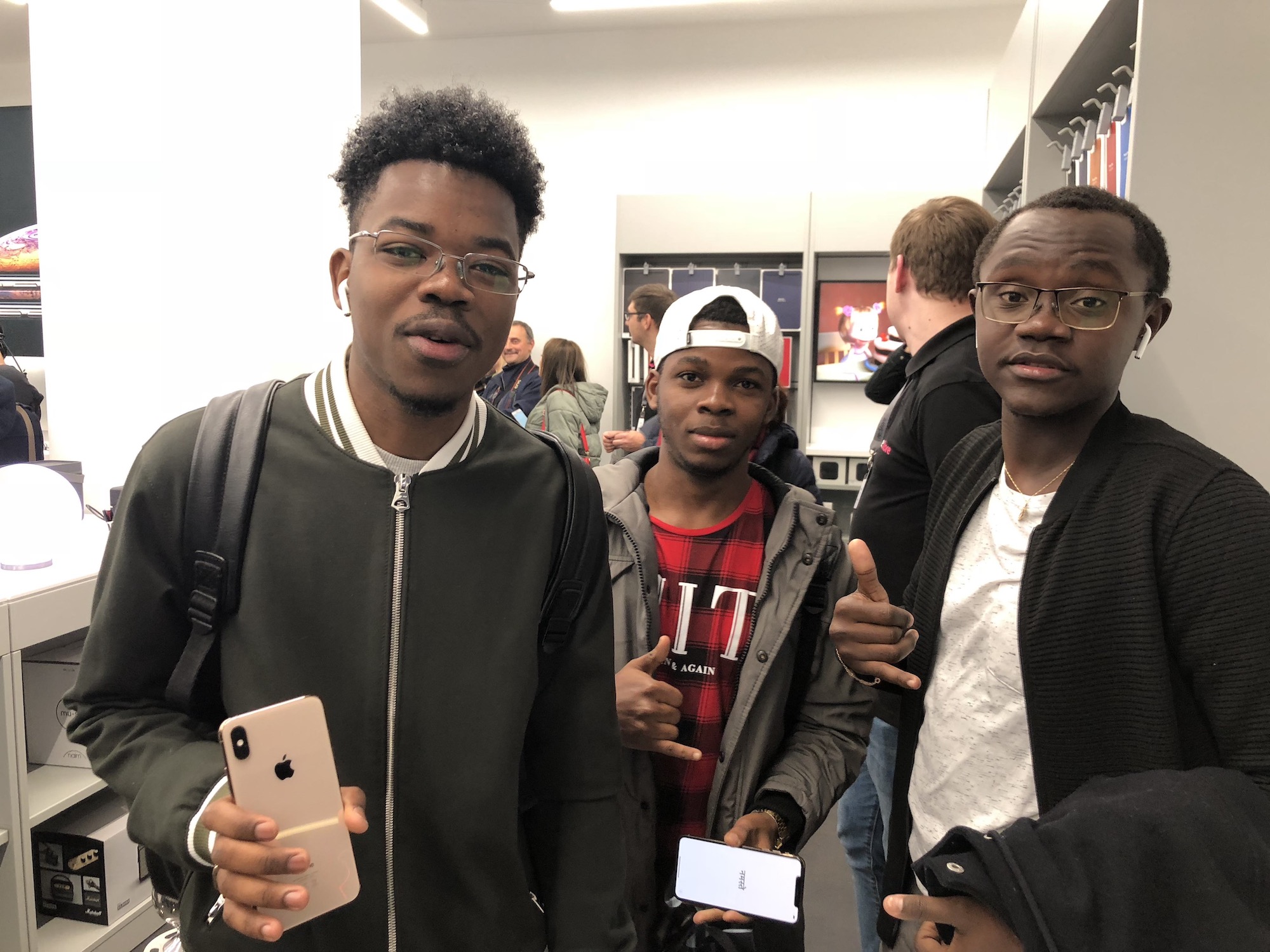 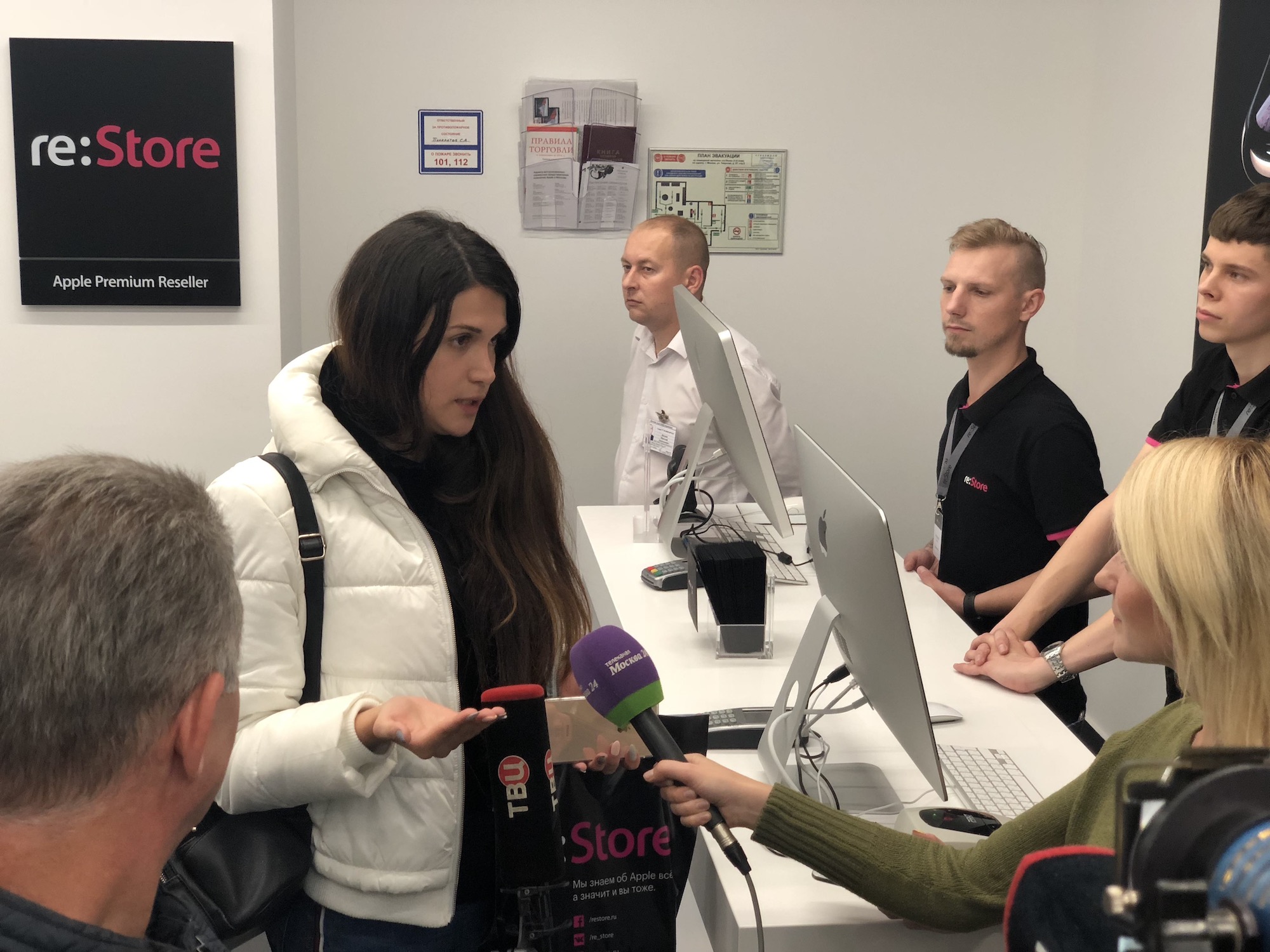 Already by 10 a.m., i.e. one hour after the beginning of work of shop, the crowd next to the entrance was not. Lyudmila Semushina explains that on September 21, guests could pre-order the desired device on the website, and everyone who did come during the day when masses of people will be gone. She also noted that since morning it was possible to judge the success of the first day of sales, but more accurate information will be available in the evening. 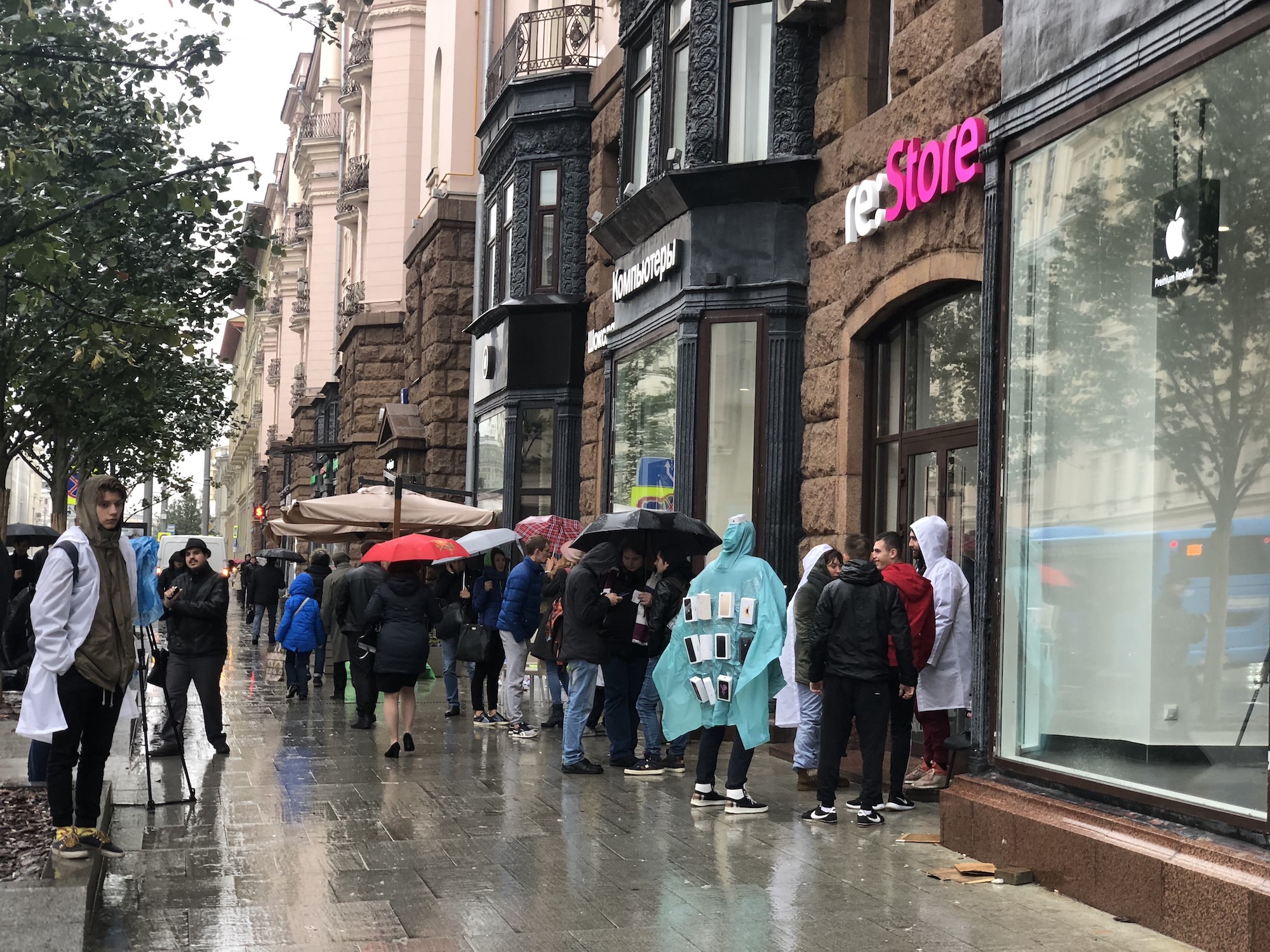 Overall, the event was quiet, peaceful and thank you re:Store and not without amusing situations, for which special thanks to the buyers.