Apple has officially introduced a new generation of branded mobile platform iOS 10. The announcement of the software product was held at the worldwide developers conference WWDC, which started in San Francisco on June 13. 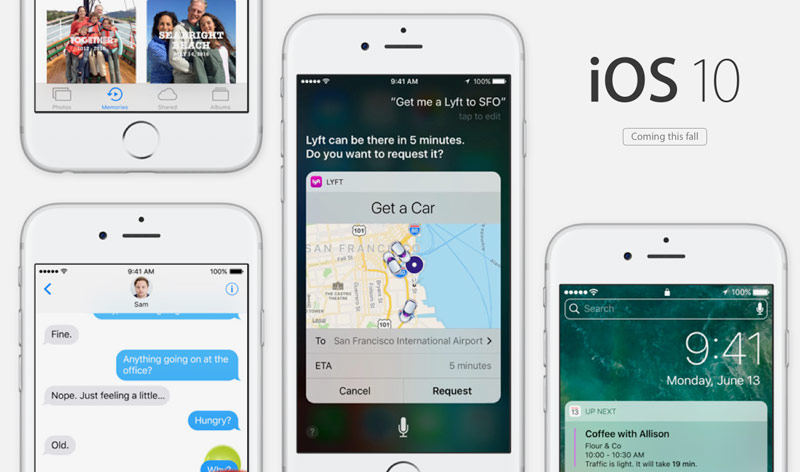 Waiting in anticipation of the release of iOS 10 felt almost stronger than on the eve of the announcement of the next iPhone. In the new OS Apple has sold a significant number of new features and optimized – improved system performance and reduced response time to user actions.

Showing iOS 10, the company said about 10 major innovations, among which a new panel with widgets on the screen Spotlight, it’s a new day and interactive icons on the desktop. The lock screen will offer the system with rich notifications and enhanced use of taps 3D Touch.

Another innovation for Siri. Apple announced the launch of voice assistant API for third party developers. This will allow, for example, iPhone users to ask the assistant to call Uber or sign up for a flight from airlines application: scope of functions is rather wide.

Technology deep learning Siri can now be used in the keyboard, which will give more accurate clues to the context, for example, featuring the children play in the Park from game of Spartacus. Tips will also take account of the current position, contacts, calendar data, and multilingual typing.

Changes in the Photos. Native program to work with images in iOS 10 is able to recognize faces and objects. Each photo requires 11 billion computing operations, said in Apple’s current power of mobile devices. Photos will be automatically combined in the collection, so it’s user to take photos and iPhone or iPad itself will sort the contents and prepare the video.

Apple continues to improve maps in iOS 10. In the new OS app has an updated design and several new features: tooltips, smart search, a dynamic view in Navigator (on the way, for example, you can find a gas station). In addition, Apple Maps now analyze the calendar and offer the user the path to the place.

Apple opens the APIs of a map service for third-party developers. Now users can call a taxi (and pay via Apple Pay). This card will display the current trip: where is the driver where they are going and how long to wait.

Significant upgrade touched the Music app in iOS 10. Radically new interface should simplify the use of musical Apple Music service: in the tab “For you” appeared on one playlist, in which each day will be added new songs recommended by the service; added support for lyrics, a new tab is “Downloaded music” and a list of recently played songs. From the main menu disappeared tab music service Connect.

Function is accessible from the control room.

In the iMessage app introduces several important innovations: handwritten messages, miniatures inserted links, including YouTube videos, photo insert from the library with a simple swipe, automatic insertion, emoticons, messages now you can add effects or change the text size if desired. Applications increased three times the emoticons and added option Digital Touch – the other person sees in real time that draws the user. In a similar way technology works on the Apple Watch.

During the presentation, Apple announced the opening iMessage for developers and the launch of the App Store for corporate chat. Now third-party developers can integrate their services into the chat, including send payments with Messages.

Among other innovations in iOS 10: collaborate on notes, the ability to edit Live Photos, Split View for Safari on iPad.

Download iOS 10 beta 1 are registered developers starting today, the public testing will begin in July of this year. A public version of the operating system will be available on iPhone, iPad and iPod touch this fall.