New 4-core processor Apple’s A10 Fusion does not stand a chance in terms of performance competitors. To such conclusion experts of the Mobile Chip Report, studied the new system-on-chip Apple. 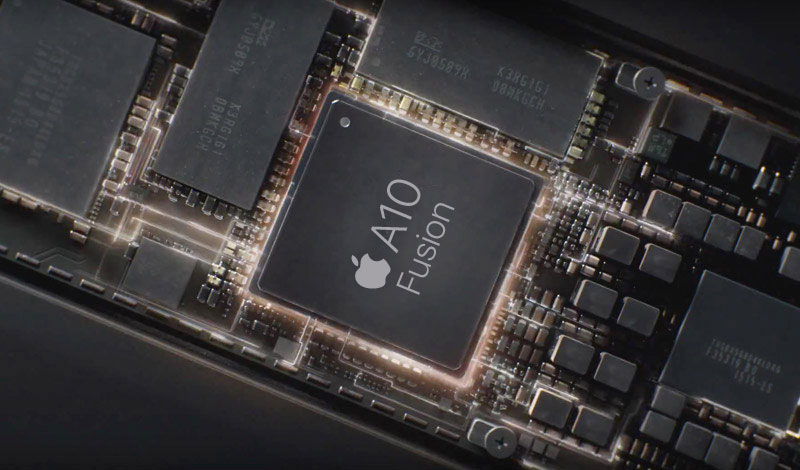 Since the iPhone was first used by a SoC developed by Apple (A4), the company does not consider it necessary to equip their hardware with more than two cores ARM. The goal of the creators SoC A-series was and remains the most effective extraction of parallelism from single thread of instructions. All generations of the iPhone, succeeding over the years, this approach has proved its efficiency, allowing Apple to at least compete with mobile SoC that has four or more cores (as licensed from ARM design and based on original IP), in such a resource-intensive and typical smartphone tasks like web-surfing and 3D games.

However, if from the point of view of the performance of four eight-core CPU are not the only, and the conclusion, not the best solution, which competes with Apple chips SoC of the highest category there is one advantage that the engineers of the Californian company for the time being in no hurry to adopt. ARM in 2011 proposed the architecture of Big.LITTLE, which involves placing the crystal between two clusters of cores — high performance and energy efficient. Load the or otherwise distributed in accordance with the purpose of clusters that eventually increases the performance per watt of power consumed by the SoC.

In a narrow sense, the term Big.LITTLE refers to selected combinations of cores developed by ARM, but with the same success, this principle is used in products such as the Samsung Exynos 8 Octa 8890 and Qualcomm Snapdragon 820, equipped with the nuclei of the original design. Releasing Apple’s A10 Fusion, the company from Cupertino has also gone on the beaten track.

Apple’s A10 Fusion includes two dual-core cluster and a hardware controller that performs the migration of tasks between the latter. The word “migration” with high probability means high-performance and energy-efficient clusters never work simultaneously, and at the time of disconnecting one of the clusters, it passes the data to the second cache through the shared L2. 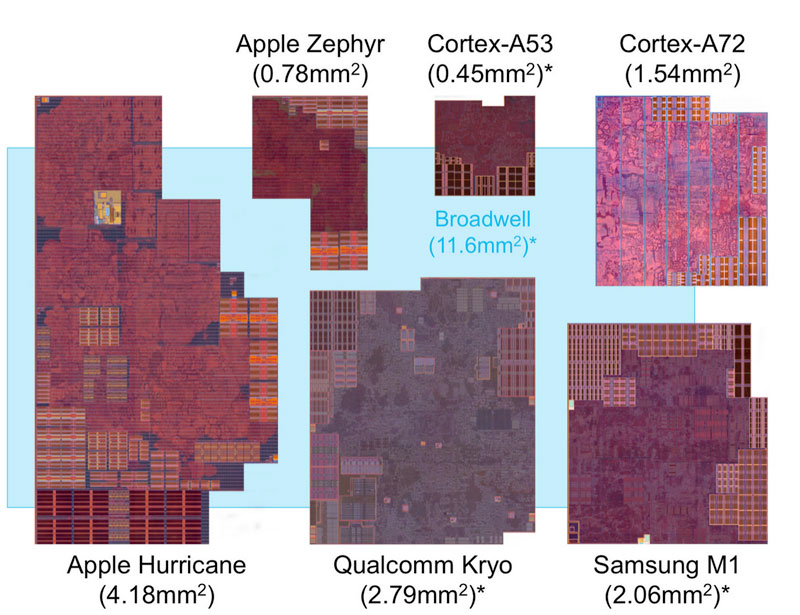 High-performance cluster cores Hurricane covers an area of 16 mm2, compared with 13 mm2 in the Apple A9. Increasing the area against the background of a General increase in the density of IC can be interpreted so that two smaller nuclei Zephyr located in any of the other possible locations, but the main cluster was increased. However, the more wealthy it seems another hypothesis: energy-efficient and high-performance cluster integrated with each other. The last way organizations can be associated with such characteristics of the chip, as efficient use of transistor budget and method of migration of the load between the clusters. The word Fusion in the name of the SoC may indicate just that.

Apple’s A10 Fusion is manufactured at TSMC on the 16 nm FinFET technology and has an area of 125 mm2, 20.5 mm2, exceeds the area A9 is also manufactured by TSMC. If you rely on an independent assessment of the number of transistors in both SoC (more than 2 billion and 3.3 billion respectively), the A10 Fusion achieved significantly greater density of components compared to the first experience of the applications of 16 nm FinFET process technology from Apple.

“The new processor Apple appears even better Intel INTC x86 – the experts Mobile Chip Report. – Its performance is comparable to the performance of processors Intel Skylake Core, so it is very possible that Apple A10 can be used in laptops”.

“In terms of performance Apple CPU came out on the same level with Intel. In fact, the new kernel Hurricane may become the basis for devices like the MacBook Air, which use low-speed Intel processors”.

Over the past few years, Apple held a number of important activities to develop computing chips for its popular mobile electronics iPhone, iPad, iPod and Apple TV. Recent speculation about the possibility of Apple transition from Intel to their own chips in Macs began to sound louder. In particular, the source code of the operating system macOS Sierra shows that Apple has added to its desktop OS support for the ARM family of chips Hurricane.

In 2014 former Apple CEO Jean-Louis Gasse, who was at the helm of Apple from 1981 to 1990, expressed confidence that the company would move the Mac to ARM processors in 2016. The main arguments in favor of the ARM architecture, the top Manager called energy efficiency, low cost and native integration with mobile devices.